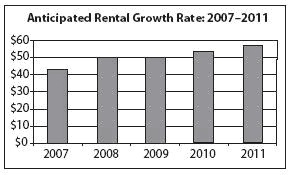 The expected trend in market rental rates over the period of projection, expressed as an annual percentage increase. In the chart,rents are expected to be at $43 a foot for 2007, climb rapidly to $50 a foot for 2008 because of a lack of new buildings coming online,remain at $50 a foot during 2009 because of the opening of new buildings,and then climb moderately afterward.

Feedback
Flashcards & Bookmarks ?
Please log in or register to use Flashcards and Bookmarks. You can also log in with
Flashcards ?
My bookmarks ?
+ Add current page to bookmarks
References in periodicals archive ?
For the Bay Area, rental growth rate is at 17% YoY," Pronove said.
Metro Manila Office Market Needs More Supply -- Pronove Tai
What we can expect, at least in the short term 2019, would have to be similar to where we are now," said William Forrest, multifamily broker with CBRE, who cited the current rental growth rate at 1.5 percent.
Experts expect steady growth in multifamily rental, occupancy rates
Suppose the annual volatility of the rental growth rate is o = 10%.
Valuation of flexible leases for corporate tenants facing uncertainty in their required workspace/ Lanksciosios nuomos komerciniams nuomininkams vertinimas, esant netikrumui del reikiamo darbo ploto
"This trend has contributed to retail warehousing emerging as the best performing sector of the retail property market over the past ten years, with a rental growth rate of 5.7 per annum."
BUSINESS LIFE: COMMERCIAL PROPERTY: DIY boom a bonus for retail operators
However, despite a more constrained rental growth rate, 277 of the 330 locations surveyed were either static or increased over the year.
Tourists help push Fifth Avenue rents to $3,500 psf
Dubai: The new centre to oversee rent disputes in Dubai in areas will most affect areas with already high rental growth rate, according to Craig Plumb, head of research in the Middle East and North Africa (Mena) for Jones Lang LaSalle.
New centre to look after rent disputes could encourage more investments in Dubai realty
Reis reports a 3.1 percent average annual rental growth rate over the last six years in Detroit, though this rate is expected to slow somewhat over the next few years.
REISCAST ISSUES DETROIT RETAIL MARKET REPORT
Alabang CBD had one of the fastest rental growth rates at 3.9% YoY, given its tight market conditions.
KMC Savills office development boasts low vacancy rates despite increase in office rental rates
We believe that the increasing demand for this type of properties, and the attractive demographics of their respective regions, will continue to sustain the strong rental growth rates they already benefit from." Highpoint Club and Montevista at Windermere are two apartment communities, which combined have 708 units.
Investcorp grows residential real estate portfolio worth $350m in Florida, Arizona
Mueller, "Real Estate Rental Growth Rates at Different Points in the Physical Market Cycle," Journal of Real Estate Research 18, no.
Market Equilibrium Analysis
That article noted that the drops, as well as slowing rental growth rates in other areas, could be the first indication that the apartment sector's historic, six-year bull market may finally be coming to an end.
Multifamily leasing concessions: a tale of two cities: with the apartment housing sector performing so strongly during the past half-decade, concessions have been relatively scarce. that is changing
Forecast rental growth rates have declined slightly since 2015 according to CBRE, consistent with the pattern of slower revenue growth due to revenue enhancement models, to 3.55 percent currently.
Self storage cap rates in decline as investor interest rises
Financial browser ?
Full browser ?
CITE
Site: Follow: Share:
Open / Close