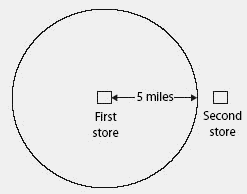 A shopping center lease clause that prevents a tenant from opening another store within a certain radius of the current shopping center.The purpose is to prevent a competitor from duplicating the landlord's tenant mix in a nearby mall.In the drawing,a 5-mile radius clause would not prohibit the second store, even though they probably have overlapping market areas.Most courts require the restriction to be reasonable in duration and geographical area in order to be enforceable. Contrast with reverse radius clause.

Feedback
Flashcards & Bookmarks ?
Please log in or register to use Flashcards and Bookmarks. You can also log in with
Flashcards ?
My bookmarks ?
+ Add current page to bookmarks
Mentioned in ?
References in periodicals archive ?
Australian rock band Tame Impala was elevated to the top headliner slot in December to replace Justin Timberlake, who dropped off the line-up after his rescheduled tour dates due to bruised vocal cords conflicted with Coachella's radius clause.
Kanye West out of Coachella over giant dome
You realize too late that Gertie's lease does not include a radius clause, which would prohibit Gertie from opening another store within a certain distance (and impacting yours).
Is your tenant headed for trouble? The following article is an excerpt from the new IREM key report, strategies for working with small tenants
* The radius clause protects the sales in the center by preventing tenants from opening a similar business within three to five miles of the center.
the shopping center: how is it different?
They also have "radius clauses" that bar headline acts or traveling Broadway shows from booking performances within a certain radius or time frame.
Sucker bet