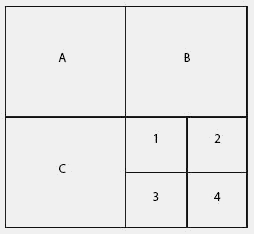 A parcel of land described by starting with a 640-acre section and then dividing it into four equal quarters,each with 60 acres. In the figure, A, B, and C are all quarter sections, and 1, 2, 3, and 4 together make a quarter section. See public land survey system.

Feedback
Flashcards & Bookmarks ?
Please log in or register to use Flashcards and Bookmarks. You can also log in with
Flashcards ?
My bookmarks ?
+ Add current page to bookmarks
Mentioned in ?
References in periodicals archive ?
Explanatory variables for the estimated density functions include distance from the traditional city center at the intersection of State and Madison streets, distance from O'Hare Airport, and distance from the nearest quarter section that is part of a subcenter.
I include dummy variables that equal one when a quarter section is within one-third of a mile and between one-third and one mile of the following sites: a highway interchange, a commuter rail station, an elevated train line (the "el"), a station on an electric line serving the South Side, and Lake Michigan.
Employment subcenters in Chicago: past, present, and future
None of the appraisers called by the operators were prepared to give any consideration to an upward adjustment in their en bloc [larger parcel] values to take into account the smaller parcels involved even though some admitted that a small parcel might attract a larger per acre value than a whole quarter section. In effect, they were prepared to totally ignores.
At the effective date of valuation, Bonaventure owned most of a quarter section of land (160 acres) in the northwest quadrant of the city of Edmonton in the province of Alberta.
Expropriation and condemnation: The larger parcel. (Features)
Fifty 10 m radius vegetation plots were established in each quarter section to measure habitat availability.
Habitat Quality, Population Density and Habitat-specific Productivity of Red-winged Blackbirds (Agelaius phoeniceus) in Boulder County, Colorado
There was little else to whinge about other than the blocked out quarter sections which link the bonnet to the front side windows.
Stretched but ideal for the urban jungle; A matter of opinion
Begin by attaching two slats on either side of the joints between the quarter sections, so each slat is 1/4 in.
Tree bench: a simple, shady sit-me-down for your yard
Climb to its highest point and you will find where the Geodetic Survey of Canada in 1928 placed a square cement marker at the fence line, marking the boundary between two quarter sections. Family tradition has it that Uncle George saw a light on the hill that year and saddled a horse to ride up and see what was going on.
Big Hill and the Blackfoot
Ever industrious, these two brothers thought a most practical solution would be to build one homestead on the boundary of the two quarter sections and they would sleep on opposite ends, thereby fulfilling their homestead obligation.
New Calgary park steeped in local history
Fence lines divide farmers' fields into quarter sections and mark the limits of public roads.
Known as the Dominion Lands Survey System, it established the boundaries for quarter section sized homesteads in western Canada's formative years, eventually covering over 200 million acres or 312,500 square miles, almost one-tenth of the entire land area of Canada.
(Edouard Gaston Daniel) Deville era: survey of the western interior of Canada