A graphical representation of the possible outputs using two or more inputs assuming that all inputs are used efficiently. For example, if one wishes to determine the most efficient use of raw material and labor to make as much of a product as it efficient, one may design a PPF that would show all possible production outputs, which is shown as a curve. One would then find the most efficient point on a curve and use resources accordingly.
Farlex Financial Dictionary. © 2012 Farlex, Inc. All Rights Reserved 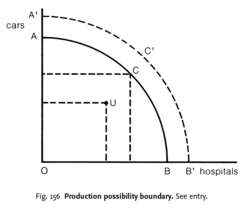 The boundary is curved rather than a straight line because not all resources are equally efficient in production of the two goods. Thus, near point A, where a large number of cars are being produced and few hospitals, large numbers of construction workers have been diverted from hospital construction to make cars, and as it is unlikely that they will be as efficient working in engineering as in construction, as we move from point C to point A the production possibility curve flattens. By contrast, near point B, where large numbers of hospitals are being built and few cars, large numbers of engineering workers have been diverted from car making to construction work, and since they are likely to be less efficient at the latter than the former, as we move from point C to point B the boundary steepens.

The point labelled U indicates UNEMPLOYMENT. More of both goods can be produced as idle resources are employed up to the limit set by the production possibility boundary. The broken line A1B1 shows how the production possibility boundary tends to move outwards over time as a result of long-term ECONOMIC GROWTH, which increases POTENTIAL OUTPUT. How far outward the boundary moves and how quickly depends upon the rate of economic growth. See OPPORTUNITY COST, LINEAR PROGRAMMING, SUPPLY-SIDE ECONOMICS, PARETO OPTIMALITY, INTERTEMPORAL SUBSTITUTION.