Policy protecting the holder against loss resulting from default on a mortgage loan.
Copyright © 2012, Campbell R. Harvey. All Rights Reserved.

An insurance policy that a mortgage holder buys on behalf of a lender, protecting the lender in the event of default on the mortgage. Most lenders require their mortgage borrowers to purchase PMIs if the mortgage's loan-to-value ratio is more than 80%. Generally speaking, annual premium payments on PMIs are equal to 0.5% of the value of the mortgage at the time it is borrowed. When the loan-to-value ratio falls below 78%, most lenders are required to inform homeowners that they may cancel their PMI policies. Some borrowers avoid PMI by taking out a piggyback mortgage, that is, a second mortgage allowing one to borrow up to 100% of the home's value in which the loan-to-value ratio is approximately 80% in the first mortgage and 20% in the piggyback.
Farlex Financial Dictionary. © 2012 Farlex, Inc. All Rights Reserved

When you buy a home with a down payment of less than 20% of the purchase price, your lender may require you to buy private mortgage insurance (PMI), which protects the lender against the risk that you may fail to repay your loan.

The premiums you can expect to pay will vary, but typically come to about 0.5% of the total amount you borrow.

You can usually cancel your PMI when you meet certain criteria. Generally, this is when the balance of the mortgage is paid down to 80% of either your home's original purchase price or its appraisal value at the time you took out the loan. You can check if it's possible to cancel your PMI by reviewing your annual mortgage statements or by calling your mortgage lender.

If you forget to cancel your PMI, your lender is required by federal law to end the insurance once your outstanding balance reaches 78% of the original purchase price or appraisal value at the time you took the loan, or you have reached the mid-point of the loan term, provided you meet certain requirements.

Insurance to cover a lender's risk if it extends a loan for more than 80 percent of the fair market value (or purchase price,whichever is less) of property.Usually,the borrower pays the premiums for the PMI insurance. See also Homeowners Protection Act of 1998, which is popularly called the PMI Cancellation Act. 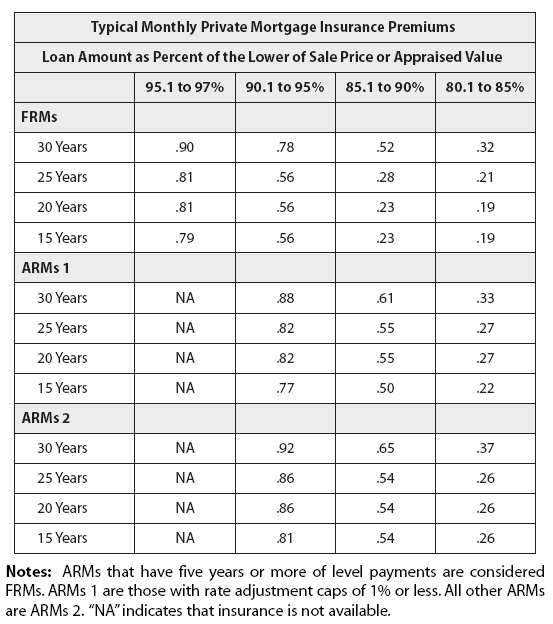 As distinguished from mortgage insurance provided by the government under FHA and VA.

Insurance Premiums: Premiums are most often quoted as annual rates that are paid monthly. Some typical premium rates are shown below. They vary by type of mortgage, down payment, and term. In the future, it is likely that insurance premiums will be tied to other transaction features that affect risk.

The premiums charged by different companies are either identical or so close that the difference isn't worth bothering with.

Alternative Premium Plans: There are a number of ways of paying for PMI but several of them are historical relics and rarely used. Today, about 90% of the policies carry the monthly premiums shown in the table on the next page.

An attractive alternative to the monthly premium plan is the financed upfront premium, where a one-time premium is included in the loan amount. On a $100,000 loan with a monthly premium of $32.50, the upfront premium is 2.35%, which increases the loan amount to $102,350. Assuming an interest rate of 8%, the mortgage payment would increase by $17.25. Further, $15.66 of the additional payment is additional interest that is tax-deductible. For a borrower in the 28% tax bracket, the increase in mortgage payment net of tax savings is only $12.87. This is less than half of the premium under the monthly plan, which is not deductible.

The downside of the financed upfront premium plan is that the borrower will have a higher loan balance when the loan is repaid.
However, loan repayment in the early years results in a partial refund of the premium. In the example above, refunds are 92% after one year, declining to 50% after six years and zero after 12 years.

Unfortunately, few borrowers are aware of this attractive alternative because most lenders don't offer it. Fannie Mae and Freddie Mac require lenders to obtain special authorization to use this program on loans that are sold to them. Most lenders prefer to avoid this inconvenience and they aren't pressed because few customers are aware of the option.

The Cost of PMI: PMI is useful to borrowers because it allows loans that exceed 80% of value. So does a second mortgage. If you wanted to compare the two, the cost of PMI should be measured on the portion of the loan that exceeds 80% of value.

The cost calculation above assumes that you take a fixed-rate mortgage with a loan-to-value ratio of 95% and pay mortgage insurance for 10 years. Change the assumptions and you change the cost.

• On smaller loans within the same mortgage insurance premium bracket, the cost is higher. For example, the cost of insurance on a 91% fixed-rate loan, which has the same premium as a 95% loan, is 14.3%.

• Adjustable rate mortgages have higher insurance premiums, and therefore higher costs, than fixed-rate mortgages. Here is a handy rule of thumb for estimating the interest cost on the incremental loan made possible by mortgage insurance, assuming the loan runs 10 years. Divide the total loan by the incremental loan and multiply the result by the annual insurance premium, e.g.,
$95,000 divided by $15,000 equals 6.33, which multiplied by .79% equals 5%. Adding that to the interest rate gives an estimated cost of 12.5% on the incremental $15,000 loan.

Shoppers who want to do a more careful analysis of the cost of a mortgage with PMI relative to an 80% mortgage plus a second should use calculator 13a on my Web site. The calculator takes account of several cost factors that are not included in the interest cost figures given above, including taxes.

Why Aren't PMI Premiums Deductible? The IRS says that mortgage insurance premiums are not deductible. In this, they are inconsistent.

Why Do Borrowers Pay the Premiums? It is more historical accident than anything else. When the modern PMI industry began in the late 1950s, many states had legal ceilings on interest rates. If lenders paid for mortgage insurance and passed on the cost to borrowers as a higher interest rate, they might have bumped up against those ceilings. If the borrower paid the premium, this potential roadblock was avoided.

Unfortunately, a borrower-pay system is much less effective than a lender-pay system. Borrowers do not shop for mortgage insurance but are locked into arrangements established by lenders, who decide the insurance carrier with which they want to do business.

When the borrower pays, lenders have little interest in minimizing insurance costs to the borrower because these costs do not influence a consumer's decision regarding the selection of a lender. Insurers do not compete for the patronage of consumers, but for the patronage of the lenders who select them. Such competition is directed not at premiums but at the services provided by the insurers to the lenders. Its effect is to raise the costs to insurers and ultimately the cost borne by borrowers.

Mortgage Insurance Versus Higher Rate: Some lenders offer a higher interest rate in lieu of PMI. The sales pitch is that interest is tax-deductible whereas PMI premiums are not. The other side of the coin, however, is that the borrower must pay the higher interest rate for the life of the mortgage, while mortgage insurance is terminated at some point.

Calculator 14a on my Web site provides a cost comparison of the options. It takes account of the borrower's tax bracket, the period the borrower expects to be in the house, the PMI premium, the rate increment to avoid the premium, and the number of years until PMI terminates.

Terminating PMI: Until 1999, borrowers could terminate PMI only with the permission of the lender. Because borrowers paid the premiums, however, lenders had no financial incentive to agree. Some lenders allowed PMI termination under certain specified conditions. Others had more stringent conditions. Still others did not allow it at all. Many borrowers, furthermore, were unaware of the possibility of terminating insurance and paid premiums for years longer than necessary.

What Congress should have done to deal with this problem was mandate that lenders pay PMI premiums. If lenders paid for mort-
gage insurance and passed on the cost in the interest rate, lenders would decide when to terminate based on whether or not they felt the insurance was still needed. This would also have reduced the cost of PMI, for reasons indicated above. Instead, Congress in 1999 elected to do it the hard way, by enacting mandatory termination rules. Unfortunately, the rules are unavoidably complicated.

Under federal law, lenders are required to cancel PMI on loans made after July 29, 1999, when amortization has reduced the loan balance to 78% of the value of the property at the time the loan was made. Cancellation is automatic. Loans made before July 29, 1999, are not covered by the law.

In addition, under the 1999 law, lenders must terminate insurance at the borrower's request when the loan balance hits 80% of the original value. Borrowers who take the initiative can thus terminate earlier than those who wait. However, the lender need not comply if the property  has  a  second  mortgage  or  has  declined  in  value. Furthermore, the borrower cannot have had a payment late by 30 days or more within the year preceding the cancellation date, or late by 60 days or more in the year before that.

Loans sold to Fannie Mae or Freddie Mac, however, are subject to the termination rules of the agencies regardless of when the loan was made. And these rules are more favorable to homeowners because they are based on the current appraised value of the property rather than the value at the time the loan was made.

Under the rules of the agencies:

• Borrowers must request cancellation and obtain an appraisal acceptable to the agencies and to the lender.

• The agencies will not accept termination if a payment has been 30 days late within the prior year or 60 days late in the year before that.

Loans made before July 29, 1999, and not sold to Fannie or Freddie remain subject to the termination rules of the lender.
However, California, Connecticut, Maryland, Minnesota, Missouri, New York, North Carolina, Oregon, Texas, and Virginia also have termination rules.

The best strategy for borrowers is to assume that they are subject to the liberal Fannie/Freddie rules. After two years, they should begin periodically to estimate the current value of their house. Web sites offering tools that can help include HomeGain.com, DataQuick.com, and Domania.com.

When it appears that the agencies' requirements have been met, ontact the lender and ask whether the mortgage is held by one of the agencies. If it is, confirm the ratio of balance to current value that permits termination in your case and ask about acceptable appraisers.