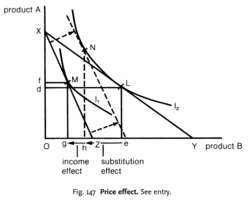 the effect of a change in PRICE upon the quantity demanded of a product. In the THEORY OF DEMAND, the price effect can be subdivided into the SUBSTITUTION EFFECT and the INCOME EFFECT. In Fig. 147, a consumer has an initial BUDGET LINE XY (which shows the different combinations of the products A and B that he can buy given the relative prices of the two products). I1 and I2 are INDIFFERENCE CURVES (which show the alternative combinations of the two products, each of which yields him the same UTILITY or satisfaction). The point (L) where I2 is tangential to the budget line XY denotes the initial equilibrium position for the consumer, who maximizes his satisfaction by purchasing a combination of Od of product A and Oe of product B. Assume now that the price of product B increases so that the consumer is now unable to buy as much of product B as before. This new situation is reflected in an inward shift in the budget line from XY to XZ. The consumer will move to a new equilibrium position (point M) where I1 is tangential to the budget line XZ, purchasing Of of product A and Og of product B.

The consumer's real income has been decreased by the rise in the price of product B. However, the movement from 1 to M and the reduction in the quantity purchased of B, from Oe to Og, is a result of the combination of an income and substitution effect. To isolate the substitution effect, it is necessary to increase the consumer's income just enough to compensate him for his loss in purchasing power; that is, the budget line is moved to the right parallel to itself until it becomes tangent to his original indifference curve I2 at point N (Combination N yields the same satisfaction as Combination L).

The income effect alone is determined by taking the compensating increase in income away from the consumer, that is, we revert back to budget line XZ, which cuts indifference curve I1 at point M, yielding the optimal combination of Of of product A and Og of product B. The movement from N to M is the income effect and reduces the quantity demanded of product B from Oh to Og .

For NORMAL PRODUCTS, the income effect and the substitution effect reinforce each other so an increase in price will result in a decrease in quantity demanded. In the case of INFERIOR PRODUCTS, however, the income and substitution effects work in opposite directions, making it difficult to predict the effect of a change in price on quantity demanded. In extreme cases, where a product accounts for a large proportion of household budgets, the income effect of a price change may be so large as to swamp the substitution effect so that a decrease in price leads (perversely) to a decrease in quantity demanded. For example, in developing countries, where a high proportion of (small) household budgets is spent on foodstuffs such as rice, a fall in the price of rice can lead to a fall in quantity consumed as households’ real incomes are increased and they are able to buy more meat and fish in place of rice. See GIFFEN GOOD, CONSUMER EQUILIBRIUM.

Feedback
Flashcards & Bookmarks ?
Please log in or register to use Flashcards and Bookmarks. You can also log in with
Flashcards ?
My bookmarks ?
+ Add current page to bookmarks
Mentioned in ?
References in periodicals archive ?
Firstly, we deliver some fresh evidence on the low price effect in Poland--the biggest and most liquid market in Eastern Europe, and one which has not been analyzed in a comprehensive way so far.
The low price effect on the Polish market
However, models studying the consequences of international migration do not take a price effect, which arises from an imperfect substitutability of goods produced in different countries, into account.
Migration and welfare
Monetary incentives crowding out the motivation to undertake an activity may be considered a major anomaly: it predicts the reverse reaction to the one expected according to the relative price effect, on which much of economics is based.
Crowding effects on intrinsic motivation
and who therefore treat the price effect as an argument against changing
Promises and prices
Asked when a price effect will be seen from the consolidation in the industry, Dahl said he expects this in the second half of 2012.
-CEO says Codfarmers's Q3 2011 figures disappointing - paper
Group revenue of [euro]3,762 million (Ql 2010: [euro]3,246 million) reflects a seven percent increase in volumes and a four percent positive price effect.
AkzoNobel reports a 16 percent gain in Q1 revenue
Previous studies on the price effect of views have focused on homes with views of amenities such as water and golf courses.
High-end lots priced at a premium
"That oil price effect directly impacts on the gas market here and our electricity production is much more sensitive to gas prices than many other European economies," said Jeremy Nicholson, director of the Energy Intensive Users Group.
Businesses feel heat as oil prices drive up energy costs; ENERGY
The firm-specific information content can have greater price effects. In addition, the matching-firm price effect may be dampened by the increased competition from the added firm.
What's in the news? Information content of S&P 500 additions
Conrad, 1989, "The Price Effect of Option Introduction", Journal of Finance, 44:487-498
15070300 Option listing
OIL PRICE EFFECT CHANNELS AND THE REDUCED-FORM EMPIRICAL EVIDENCE
Oil prices and consumer spending