Per caput financial definition of per caput
https://financial-dictionary.thefreedictionary.com/per+caput
Printer Friendly

(redirected from per caput)
Also found in: Dictionary, Thesaurus, Legal.

Per capita is the legal term for one of the ways that assets being transferred by your will can be distributed to the beneficiaries of your estate.

Under a per capita distribution, each person named as beneficiary receives an equal share. However, the way your will is drawn up and the laws of the state where the will is probated may produce different results if one of those beneficiaries has died.

For example, if you specify that your children inherit your estate per capita, in some states only those children who survive you would inherit. In other states your surviving children and the surviving descendants of your deceased children would receive equal shares. That could result in your estate being split among more heirs than if all your children outlive you. 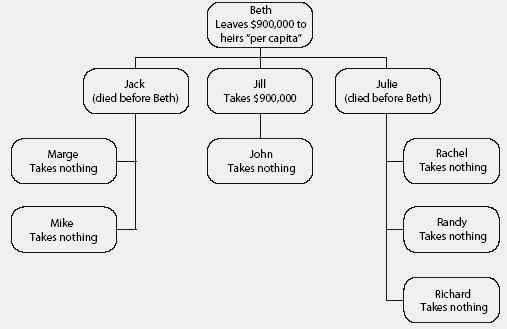 Per head; per person. The term is most often encountered in estate planning, where assets may be left to heirs, per capita. In a per capita distribution, a predeceased heir's portion is shared equally among other heirs at the same level.

Example:  Beth leaves $900,000 to her heirs, per capita. She has three children, but two of them die before her. Each child would have received $300,000 if alive. Because the gift was per capita, the money is divided among only the children who survived Beth. In the following diagram, one child will receive the entire $900,000. The grandchildren—children of the predeceased children—receive nothing. Contrast with per stirpes, in which the share belonging to predeceased heirs would go to their own heirs. Using per stirpes distribution in the example, Jill takes only $300,000, Jack's children share $300,000, and Julie's children share
$300,000.

Feedback
Flashcards & Bookmarks ?
Please log in or register to use Flashcards and Bookmarks. You can also log in with
Flashcards ?
My bookmarks ?
+ Add current page to bookmarks
Mentioned in ?
References in periodicals archive ?
Poland imported over 33,000 tons in 1988 - equivalent to one cup per caput per day, while Romania imported only 300 tons - equivalent to five cups per caput per annum.
World tea production & price forecast
In Nigeria, fish alone contributes between 20% and 25% per caput animal intake and could be as high as 80% in coastal and riverine communities [4].
Comparative study of piscine and non-piscine pituitary extract and ovulin for inducing spawning in catfish (Clarias gariepinus)
World rice utilization is forecast to expand by 2 percent to nearly 470 million tonnes, which keeps average per caput rice consumption stable.
Global Cereal Supply Likely to Improve in 2012/13