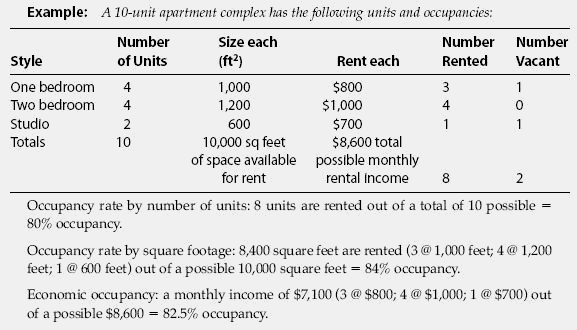 Feedback
Flashcards & Bookmarks ?
Please log in or register to use Flashcards and Bookmarks. You can also log in with
Flashcards ?
My bookmarks ?
+ Add current page to bookmarks
Mentioned in ?
References in periodicals archive ?
"The 2012 Olympic and Paralympic Games will no doubt have had a positive influence on occupancy rates with teams, staff and spectators staying in the city.
Golden Olympic performance for hotels in capital; SPORT EVENTS MEANT MORE STAYED IN THE CITY
Another sign that the industry is recovering is in the slow, but steady, growth of occupancy rates. During the first quarter of this year, median occupancy rates held steady for assisted living at 88 percent, after an increase from 87 percent during the third quarter of 2004.
Can you spare a few million? Loan performance at an all-time high
Most skilled nursing operators will probably not be surprised by recent national data showing that the sector's occupancy rates have been recovering over the past year.
Things are looking up--selectively
The highest occupancy rate was 52.34% in 1995, down to 48.38% in 1997 after the addition of more hotel rooms.
Number of foreign tourists down, keeping hotel industry in the doldrums
In west Little Rock, the Koger Office Park, with 330,700 SF, enjoyed some of the highest occupancy rates despite being the most expensive.
The battle for real estate supremacy
Meanwhile, "Alexandria's hotels' occupancy rate hiked by 11% in FY 2018, with expectations to grow by 3% in FY 2019," Colliers added.
Sharm El Sheikh's hotel occupancy to grow by 7% in FY 2019: Colliers
Kuwait's Al Rai Daily has reported that hotel occupancy rates during the new year period in the country have witnessed new highs.
Kuwait new year hotel occupancy sees gains
The 170-room hotel in northeastern Seoul had an occupancy rate between 70 percent and 80 percent according to the hotel, and less than 70 percent according to its competitors.
Marriott Dongdaemun struggling to fill empty rooms
Passenger occupancy rate on Khasab-Shinas route reached 43 percent.
NFC Transports Over 51,000 Passengers and 12,000 Vehicles
"This Eid was amazing and a very successful one as all hotels were packed with a 90pc occupancy rate on average," said Five-Star Hotels Society chairman Abdulnabi Al Daylami.
Eid bonanza
Summary: The average occupancy rate at Beirut hotels stood at 56.1 percent during the 1996-2014 period.
Beirut hotel occupancy second lowest in Middle East