1. The expression of a currency in terms of one U.S. dollar. For example, if a pound is worth $2.05 on a given day, it has a multiplier of 2.05. This is also called an American currency quotation. See also: Currency pair

2. In Keynesian economics, the change in income (such as GDP or GNP) that results from a capital injection. For example, if a government spends a certain amount of money building a bridge, it must hire and pay workers to do so. These workers in turn spend their earnings on other goods and services, which fuels economic growth. The multiplier measures how much each dollar the government spends increases economic growth. See also: Demand-side economics.
Farlex Financial Dictionary. © 2012 Farlex, Inc. All Rights Reserved 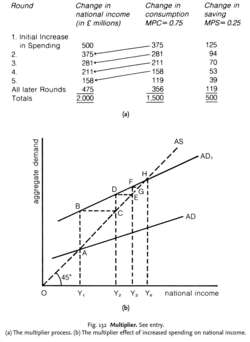 the ratio of an induced change in the EQUILIBRIUM LEVEL OF NATIONAL INCOME to an initial change in the level of spending. The ‘multiplier effect’ denotes the phenomenon whereby some initial increase (or decrease) in the rate of spending will bring about a more than proportionate increase (or decrease) in national income. Two important features of the multiplier need to be noted:

For simplicity, let us assume that all income is either consumed or withdrawn as SAVINGS. (That is, the MPC and MARGINAL PROPENSITY TO SAVE (MPS) together = 1.) The value of the multiplier (K) is then given by the formula:

The multiplier effect is illustrated in Fig. 132 (a) and. With a multiplier value of 4, an initial £500 million of extra spending results in a £2 billion increase in national income, as Fig. 132 (a) shows. In each round, a proportion of the additional income created is saved and so leaks from the circular flow, failing to get passed on as additional consumption expenditure in the next round. When the cumulative total of these savings leakages is equal to the initial increase in spending, the multiplier process ceases and the economy reaches a new equilibrium.

In addition, of course, to the savings ‘withdrawal’ from the income flow, there are also TAXATION and IMPORT withdrawals that further reduce the value of the multiplier. Thus, the more sophisticated multiplier is given by the formula: