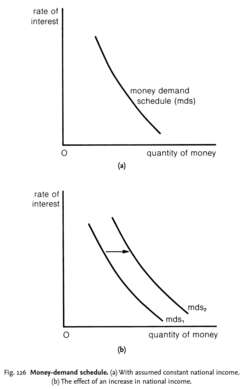 (b) The effect of an increase in national income.

a schedule that depicts the relationship between the quantity of MONEY demanded, Qd (LIQUIDITY PREFERENCE), and the INTEREST RATE, i, at a given level of NATIONAL INCOME, Y:

An increase in national income increases the TRANSACTION DEMAND FOR MONEY and may increase the PRECAUTIONARY DEMAND for money, shifting the money demand schedule outwards to the right, from mds1 to mds2 in Fig. 126. The money-demand schedule interacts with the MONEY-SUPPLY SCHEDULE to determine the equilibrium INTEREST RATE.

Feedback
Flashcards & Bookmarks ?
Please log in or register to use Flashcards and Bookmarks. You can also log in with
Flashcards ?
My bookmarks ?
+ Add current page to bookmarks
Mentioned in ?
References in periodicals archive ?
Which of these possibilities occurs depends, in a complicated way, on the second and third derivatives of the money-demand schedule.(5)
Figures 3 and 4 plot qualitatively the modulus of the eigenvalues for this system, computed at the monetary steady state, for the Cagan money-demand schedule. In Figure 3, [Theta] is on the horizontal axis, while in Figure 4, [Alpha] is on the horizontal axis.
Bruno and Fischer (1990) interpret a related model with bonds and a Cagan money-demand schedule. In their interpretation, a constant-money-growth policy is superior to a constant-deficit policy because, in the former case, the nonmonetary steady state would not exist.
What has become of the "stability-through-inflation" argument?