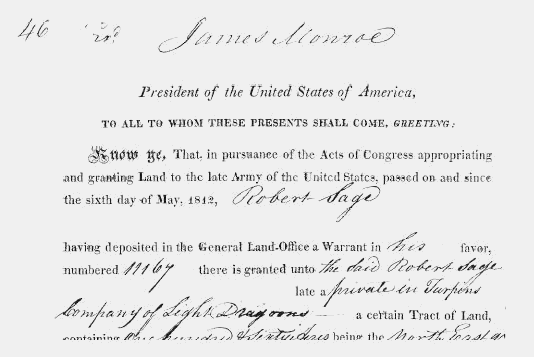 A legal document transferring ownership out of the government—federal or state—to a private individual.The following sample is an excerpt from a patent out of the United States to Robert Sage,on May 6,1812, for 160 acres of land,signed by President James Monroe.

Feedback
Flashcards & Bookmarks ?
Please log in or register to use Flashcards and Bookmarks. You can also log in with
Flashcards ?
My bookmarks ?
+ Add current page to bookmarks
TheFreeDictionary presents:
Write what you mean clearly and correctly.
References in periodicals archive ?
A IN 1449, Henry VI issued the first recorded letter of patent to a Flemish man for a 20-year monopoly to make stained glass.
Question Time
For example, the National Indian Brotherhood (NIB) (18) began organizing in the late 1960s and filed its letter of patent with the Gazette in 1970.
Founding The total number of Aboriginal organizations organizations that filed a letter of patent in a given year, 1951- 2000.
What causes Canadian aboriginal protest? Examining resources, opportunities and identity, 1951-2000
Financial browser ?
Full browser ?
CITE
Site: Follow: Share:
Open / Close