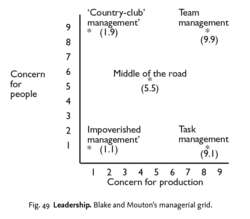 Feedback
Flashcards & Bookmarks ?
Please log in or register to use Flashcards and Bookmarks. You can also log in with
Flashcards ?
My bookmarks ?
+ Add current page to bookmarks
Mentioned in ?
References in periodicals archive ?
Alternatively, transformational leadership involves strong personal identification with a leader, presentation of a vision of the future that can be shared (Yammarino & Bass, 1990), and motivating followers beyond original expectations (Hartog et al., 1997).
The multifactor leadership questionnaire, known as the MLQ, is most commonly used to measure transformational and transactional leadership styles and has been used to investigate gender differences (Antonakis, Avolio, & Sivasubramaniam, 2003; Avolio, Bass, & Jung, 1999; Bass & Avolio, 1995).
In meta-analysis research on the differences in leadership between men and women, women exhibited more transformational leadership behaviors than men (Eagly, Johansesen-Schmidt, & van Engen, 2003) and adopted a more democratic or participative style and a less autocratic and directive style than men (van Engen, 2001).
According to Walumbwa, Wu, & Ojode (2004), the gender of the student impacts the perception of an instructor's leadership style.
Follower perceptions of leader classroom behavior
Issues that seem especially relevant to the redesign of leadership preparation programs will be highlighted, especially those involving the trend toward incorporating more authentic, performance-based learning activities in formal educational programs.
Charles Parish Schools $50,000 to support this program, which was made available to teachers who were carefully selected based on a multi-stage screening process that assessed their vision of leadership, their promise as teacher leaders, and their eligibility for state certification.
The program itself attempted to fully integrate the study of school leadership with an array of field-based problem solving and school improvement activities that helped participants understand leadership and develop the ability to lead efforts to change and improve schools.
Teaching teachers to lead: some lessons
Leadership should be recognized the basis of progress worth of freedom.
Our vision is already prescribed which we just followed by leadership. Leadership directs the people to their right decorative promotion and ensured them political stability.
Leadership, 21st century and Pakistan
This study sought to determine the existence and type of leadership exhibited by National Collegiate Athletic Association (NCAA) Division II soccer coaches in the southern region of the U.S.
Research Question 1: What is the predominant leadership style exhibited by NCAA Division II soccer coaches in the southern region of the U.S.?
Research Question 2: What is the relationship between coaches' leadership styles and the outcomes of extra effort, effectiveness, and satisfaction?
Leadership in collegiate soccer