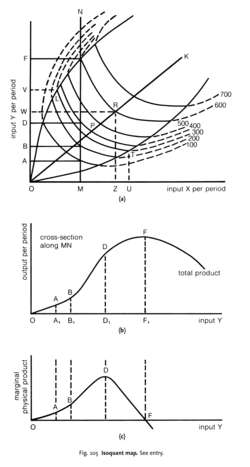 a collection of ranked ISOQUANT CURVES that exhibits, graphically, a producer's increasing output per period when moving outwards from the origin using larger quantities of two FACTOR INPUTS, as in Fig. 105 (a). Isoquant curves are a cardinal measure, and the numbers on the isoquant curves in Fig. 103 (a) indicate the absolute level of output per period. Isoquant curves never cross because two crossing curves would imply inconsistent or irrational choices between the two factor inputs by the producer (see ECONOMIC MAN).

Although it is often possible to substitute factor inputs in the production process, such substitution cannot continue indefinitely. Some minimum amount of both factors is required if production is to be maintained at a given level: for example, in order to produce 300 units in Fig. 105 (a), at least VL of X is required and at least UT of Y, for, at point T, the isoquant is horizontal, indicating that at T the MARGINAL RATE OF TECHNICAL SUBSTITUTION of X for Y is zero. Similarly, at point 1 the isoquant is vertical, showing that beyond this point the substitution of Y for X would result in a decrease in output (indicated by the fact that the isoquant sheers away from the Y axis).

The ridge lines in Fig. 105 (a) delineate those portions of the isoquants from which the firm will make its choice of resource combinations. The top one joins all points at which isoquants become vertical, while the bottom one is the locus of all points at which isoquants become horizontal. The typical relations that will obtain between one isoquant and another can be shown by taking a cross-section of the production contour’ map along the line MN. As we move up this line from M, we can read off the outputs that will be produced by increasing quantities of input Y, when used with the firm's plant and the given quantity OM of input X.

The same pattern would be recognizable if we traced the behaviour of output along a line such as OK. Here the distances between successive isoquants reduce as we move towards K until point P is reached. After this point, the distance between successive isoquants becomes progressively larger. Along the line OK, increasing quantities of the two variable factors X and Y are being combined with the firm's fixed plant and equipment.

Feedback
Flashcards & Bookmarks ?
Please log in or register to use Flashcards and Bookmarks. You can also log in with
Flashcards ?
My bookmarks ?
+ Add current page to bookmarks
Mentioned in ?
References in periodicals archive ?
Consider an isoquant map depicting the production of "an educated person," someone defined as, say, a person with the ability to discuss and apply information.
The economics of experience-based higher education
The argument whereby we reach this conclusion begins with the observation that the homothetic production function underlying the standard U-shaped cost curves of economic theory can be thought of as a constant returns to scale production function, except that the isoquants on a standard isoquant map are renumbered to show first increasing, then constant, and finally decreasing returns to scale as output increases.
Minimum Wages and the Card--Krueger Paradox