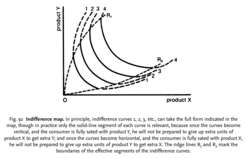 a collection of ranked INDIFFERENCE CURVES that exhibit graphically an individual's increasing UTILITY, or satisfaction, when moving outwards from the origin, consuming larger quantities of two products. See Fig. 92 . Indifference curves are an ORDINAL measure and the numbers on the indifference curves in Fig. 92 do not indicate an absolute level of utility. Indifference curves never cross because two crossing curves would imply inconsistent or irrational choices between the two products by the consumer (see ECONOMIC MAN).
Collins Dictionary of Economics, 4th ed. © C. Pass, B. Lowes, L. Davies 2005

Feedback
Flashcards & Bookmarks ?
Please log in or register to use Flashcards and Bookmarks. You can also log in with
Flashcards ?
My bookmarks ?
+ Add current page to bookmarks
Mentioned in ?
References in periodicals archive ?
If we have all the indifference curves of an individual (his "indifference map"), each one corresponding to a certain level of utility, we can theoretically calculate which bundle of goods that consumer will choose, given his budget and the prices of the goods, in order to maximize his utility.
John Hicks and the beauty of logic
Remember deriving that demand curve with the indifference map held constant and rotating the budget constraint?
Spousonomics: Using Economics to Master Love, Marriage and Dirty Dishes
He put the origin of a "yellow individual's" indifference map in the NE corner of the board and a "white individual's" origin in the SW.
Introduction of Nobel Laureates
A significant obstacle in microeconomics for many students is the connection between a utility function and the indifference map it generates.
Exploring Economic Models Using Excel
Consider in Figure 2 the two half-planes defined by the line [Mathematical Expression Omitted], following the major axis of the indifference map of voter [Mathematical Expression Omitted] and passing through ([Mathematical Expression Omitted], 0).
Political confederation
As is well known, each point along the demand function corresponds to a single point along the indifference map where utility is maximized.
A class of utility functions yielding linear demand functions
Edgeworth, Marshall's colleague and the inventor of the indifference map and the contract curve.
When geometry emerged: some neglected early contributions to offer-curve analysis
"The Public's Indifference Map between Inflation and Unemployment: Empirical Evidence from the Nixon, Ford, Carter and Reagan Presidencies." Public Choice, 60 (January, 1989), 71-85.
Yet more on misery: optimization along the short-run Phillips curve revisited, a comment on recent papers
It should be noted that the relationships shown in (7) and (8) hold anywhere on the indifference map. This should be contrasted with results elsewhere in the literature which relate measures of risk aversion to curvature only at one point in [W.sub.1!, [W.sub.2!
A note on risk aversion and preferences
Rothbard clearly thinks that it does; in remarking on the use of indifference maps in contemporary mathematical economics, he says, "The crucial fallacy is that "indifference" cannot be a basis for action" (rothbard 2004, p.
Choice and indifference: a critique of the strict preference approach
Because there is a plurality of egalitarian values which cannot be maximized simultaneously but which can be traded off in a rational fashion using multidimensional indifference maps and possibility frontiers.
Value-pluralist egalitarianism. (Philosophical Abstracts)
The ||Theta~.sub.i~ alter the consumers' indifference maps, thus capturing the effect of otherwise unobservable quality changes.
Separability of a price-dependent utility function