In real estate and investments, the difference between the purchase price and the sale price when the sale price is more. That is, when an investor buys a security or real estate and sells it for a higher price, he/she incurs a capital gain. Capital gains in the United States are taxed at a lower rate than other income if the asset is held for longer than one year. One may use capital losses to offset capital gains to minimize one's liability for capital gains taxes; indeed, some investors do so deliberately. See also: Paper gain.
Farlex Financial Dictionary. © 2012 Farlex, Inc. All Rights Reserved 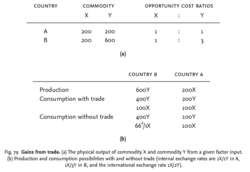 Fig. 79 Gains from trade. (a) The physical output of commodity X and commodity Y from a given factor input.

the extra production and consumption benefits that countries can achieve through INTERNATIONAL TRADE. Countries trade with one another basically for the same reasons as individuals, firms and regions engaged in the exchange of goods and services - to obtain the benefits of SPECIALIZATION. By exchanging some of its own products for those of other nations, a country can enjoy a much wider range of commodities and obtain them more cheaply than would otherwise be the case. International division of labour, with each country specializing in the production of only some of the commodities that it is capable of producing, enables total world output to be increased and raises countries’ real standards of living.

A country's choice of which commodities to specialize in will be determined in large measure by the advantages it possesses over others in the production of these things. Such advantages can arise because the country can produce particular commodities more efficiently, at lower cost, than can others. The static, or ‘pure’, theory of international trade emphasizes that opportunities for mutually beneficial trade occur as the result of differences in comparative costs or COMPARATIVE ADVANTAGE. Countries will gain from trade if each country EXPORTS those commodities in which its costs of production are comparatively lower and IMPORTS commodities in which its costs are comparatively higher.

This proposition is demonstrated in Fig. 79 (a) for a simple two-country (A and B) and two-product (X and Y) world economy. The same given resource input in both countries enables them to produce either the quantity of X or the quantity of Y. In the absence of trade between the two, X and Y exchange in country A is in the ratio IX/IY, and, in country B, in the ratio IX/3Y These exchange ratios indicate the marginal OPPORTUNITY COST of one commodity in terms of the other. Thus, in country A the opportunity cost of producing one more unit of X is IY

The limits to mutually beneficial trade are set by the opportunity-cost ratios. Within these limits, specialization and trade on the basis of comparative advantage will enable both countries to attain higher consumption levels. This possibility is indicated in Fig. 79 (b), assuming the exchange ratio to be 1X = 2Y Using its entire resources, country B can produce 600Y, of which it consumes, say 400 and exports 200. Country A can produce 200X, of which it consumes 100 and exports 100. With trade, the 200Y can be exchanged for 100X, enabling country B to consume 400Y and 100X, and country A to consume 200Y and 100X. Without trade, country B can transform (at an internal exchange ratio of 1X/3Y) 200Y into only 662/3X, while country A can transform (at an internal exchange ratio of 1X/1Y) 100X into only 100Y. Thus both countries gain by specialization and trade. How the gain is shared between countries A and B depends essentially upon the strength of demand in the two countries for the goods they import. If country A's demand for commodity Y increases, the trading ratio of IX to 2Y would be likely to move against country A. Thus it might require 21/2Y exports to obtain IX imports, pushing country B nearer to the limit to mutually beneficial trade.

Obviously, in a more complex multicountry, multiproduct ‘real’ world situation it is less easy to be categorical about who gains from international trade and by how much. Some countries may possess a comparative advantage in a large number of products; others may possess few such advantages - countries differ in the quantity and quality of their factor endowments and are at different stages of ECONOMIC DEVELOPMENT. DEVELOPING COUNTRIES, in particular, may find themselves at a disadvantage in international trade, especially those that are over-reliant on a narrow range of volatile commodity exports.

Feedback
Flashcards & Bookmarks ?
Please log in or register to use Flashcards and Bookmarks. You can also log in with
Flashcards ?
My bookmarks ?
+ Add current page to bookmarks
Mentioned in ?
References in periodicals archive ?
The second criterion is that distributional justice increases as the gains from trade within a bilateral interaction tend toward equitable distribution.
An Exchange Theory of Social Justice: A Gains from Trade under Uncertainty" Perspective
Car dealers and real estate agents pepper customers with questions to discover how much they value different types of cars or houses and then direct customers to the product that nets the salesperson a larger share of the gains from trade. Retail manufacturers and stores create variations of similar products to meet the varying reserve prices of different customers.
An Economic and Pedagogical Defense of Gratuities
This is true whether one is measuring the gains from trade from continuing UK membership or whether the benefits of EU cooperation in the areas of technological research; scientific collaboration on projects, and support for innovation and business development from the regional industrial and agricultural sector funds.
Let's get our facts right on the perks and costs of EU
The overall themes are comparative advantage in a changing global economy, international trade and economic growth, the gains from trade and globalization, and computational modeling and trade policy analysis.
Comparative advantage, growth, and the gains from trade and globalization; a festschrift in honor of Alan V. Deardorff
Hence, England's gains from trade GT in terms of the amount of labor it saves by trading are (3)
How would David Ricardo have taught the principle of comparative advantage?
In Volatility and the Gains from Trade (NBER Working Paper No.
Volatility and the gains from trade
The topics discussed included the efficient design of social policy and transfer programs, the measurement of gains from trade, the importance of liquidity shocks in triggering recessions, the role of economic institutions in affecting the growth of manufacturing and trade, the economics of urbanization, and the economics of innovation and competitiveness.
India conference
He first covers the foreign trade paradigms of David Ricardo, explaining trade flows in terms of labor productivity, and of Eli Heckscher and Bertil Ohlin, explaining trade by differences in factor endowments, as well as the associated topics of gains from trade and distributional conflicts.
Understanding global trade
Consider half-a-dozen aspects of reality that go beyond the traditional set-up and how they affect the estimated gains from trade or levers for unlocking them.
The state of world trade: many grounds for optimism
The Trade Game (TG) is a classroom exercise that illustrates the concept of gains from trade. While most students have little difficulty with the notion that trade is mutually beneficial in some vague sense, the concrete notion that trade "creates value" is too abstract for many to grasp.
The trade game
Adam Smith's theory of the gains from trade has caused a great deal of controversy among economic theorists.
Vent for surplus: A case of mistaken identity