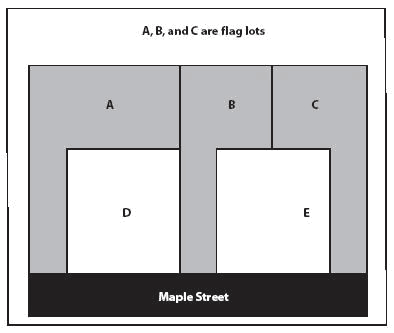 A parcel of land shaped like a flag,with a narrow strip providing access to a public street or waterway and the bulk of the property containing no frontage. When planned, it is a way to maximize property density without having to install additional streets. Some jurisdictions require subdivision platting and approval for any project that includes building additional streets.Flag lots are a way around the platting laws.

Feedback
Flashcards & Bookmarks ?
Please log in or register to use Flashcards and Bookmarks. You can also log in with
Flashcards ?
My bookmarks ?
+ Add current page to bookmarks
Mentioned in ?
References in periodicals archive ?
Other bylaw changes approved were a provision for priority development sites and a change in regulations for flag lots.
Flag lots are lots with at least five acres, but only 50 feet of frontage - not normally enough to build a house on.
Adult entertainment now has special places to go
In 2015, the city approved a partition to divide a property in half, creating a flag lot. The flag pole vehicular access was to be located on the west side of the property connecting to the public road located to the north.
OP-ED: LUBA considers benefits of exacting an unconnected sidewalk
Driveways that serve a single flag lot must be a minimum of 15 feet wide, while shared driveways must be 25 feet wide.
Eugene condos selling quickly
"Flag lots," says Humphreys, and the mix of one- and two-story plans.
Detached clusters
Early assistance is sought for the development of two flag lots at 7700 S.E.
Land use review intakes for Sept. 10, 2018
EmX update, 541-682-5343, residential flag lots, 541-682-5561.
CALENDAR
* By using a number of pipestem or flag lots, the builder was able to create numerous cul-de-sacs (which his research showed young families preferred) on curvilinear streets.
BestSellers
There are many such linkages between assumptions used in ECLA and potential constraints on future land use regulations - including regulations related to development of hillsides and upper Amazon watersheds in the Eugene's south hills, construction of high-rise apartments adjacent to single-family neighborhoods in the University of Oregon area, division of large lots in established suburban neighborhoods to create "flag lots" and mini-subdivisions, and locating large multiplexes in the backyards of older neighborhoods.
Stakes high in city land policies