1. Profits in excess of what the market would otherwise command. A company can receive economic rents if it is a monopoly, or if it is part of a cartel. See also: Rent-seeking behavior.

2. The amount of money the owner of a property can reasonably demand in order to rent that property. 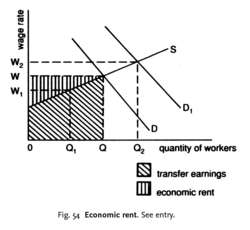 a money payment made for a FACTOR OF PRODUCTION that is over and above the minimum payment to keep it in its present use. This minimum payment is known as TRANSFER EARNINGS and it represents an OPPORTUNITY COST. Thus, for example, a person might just be willing to work as a lecturer for a minimum of £1,000 per month because he could earn this amount working in his ‘next best’ job as a taxi driver. If his actual earnings are £1,100 per month, then his monthly earnings would comprise transfer earnings of £1,000 and economic rent of £100. Economic rent is a surplus insofar as its payment is not necessary to ensure a supply of a particular factor of production. Fig. 54 shows the demand for, and supply of, lecturers at the prevailing market wage rate (OW), which is equal to, say, £1,100 per month, enough to induce sufficient lecturers (OQ) to offer themselves to work and meet the demand for their services (D). At this wage rate, the last (marginal) people offering their services as lecturers will only do so for £1,100 per month, since this is the amount they could currently earn elsewhere as, say, driving instructors. However, since all lecturers of a common grade would be paid the same per month, an intra-marginal lecturer (Q1,) would be paid wage rate OW even though he would have been prepared to work as a lecturer for a smaller wage (OW1). The economic rent of the intra-marginal lecturer is equal to WW1. Total transfer earnings in the figure are equal to the diagonally shaded area below the supply curve, and economic rent is equal to the vertically shaded area above the supply curve.

The economic rent earned by a factor of production depends essentially upon the demand for the products made with that factor and thus the DERIVED DEMAND for that factor. Thus, for example, if the demand for lecturers was to rise from D to D1 in Fig. 54, then in order to induce more people to enter lecturing and thus increase the supply of lecturers to OQ2, wage rates would need to rise to OW2. This would mean that existing lecturers such as Q1 would now earn a higher wage rate and secure a larger economic rent (W1W2). By contrast, if the demand for lecturers falls, then so will their wage rates, with some lecturers transferring to better-paid employments whilst those remaining earn wages much closer to their transfer earnings.

Some factors of production may be in relatively price-inelastic supply in the short run but more elastic-supply in the long run, and thus may earn ‘temporary’ economic rents until supply is able to adjust fully to demand. The economic rents accruing to such factors of production are termed quasi-rents’, and they tend to disappear in the long run as supply catches up with demand. For example, in the case of particular types of work where a lengthy training period is required, a sudden increase in the demand for such work would enable persons already possessing the appropriate skills to secure large quasi-rents through high wage rates.

The rent reasonably to be anticipated in the marketplace as opposed to the actual rent.For an investor familiar with economic rents in an area,there are usually many opportunities to buy properties at values based on contract rents,and then raise the rents and realize immediate growth in equity and the ability to refinance for amounts in excess of the original purchase price. Also called market rent.

Feedback
Flashcards & Bookmarks ?
Please log in or register to use Flashcards and Bookmarks. You can also log in with
Flashcards ?
My bookmarks ?
+ Add current page to bookmarks
TheFreeDictionary presents:
Write what you mean clearly and correctly.
Mentioned in ?
References in periodicals archive ?
Notable attempts to isolate, empirically, the landed property share from the non-labour, or capital, share of national income include Terry Dwyer's 'The Taxable Capacity of Australian Land Resources' and the extension and updating of this study by Gavin Putland in 'The Economic Rent of Land as a Fraction of Australian GDP'.
CLASS ANTAGONISM AND LANDED PROPERTY IN THE FUNCTIONAL DISTRIBUTION OF INCOME IN AUSTRALIA
For this reason, some mines may earn economic rent. For example, a coal mine on land with superior coal deposits (say, thicker deposit seams located closer to the surface) will be able to produce coal at lower cost than will a mine on land with inferior coal deposits (such as narrow deposit seams located at great depth).
MINERAL ROYALTIES: HISTORICAL USES AND JUSTIFICATIONS
(2) A favored scheme of anti-liberty economists is to tax away people's economic rent on the ground that that it will not affect their behavior.
The rent seeker
For the Rent averages, the current and previous prices of a sampled housing unit are its current and previous economic rents, of course.
Updating the rent sample for the CPI Housing Survey
pay tax currently on the economic rent attributable to the current year
The tax import of the FASB/IASB proposal on lease accounting
So, he received $95,000 in pure economic rent. How times have changed!
What is so bad about rent?
The sources of economic rents and maintenance of competitive advantage have received considerable attention in the economic literature for years, just to mention the works by Penrose (1959), Porter (1980) or Slater (1996).
Interconnected firms' relationships as a source of a competitive advantage
"For those who take the Ricardian perspective (Ricardo, 1817) that has been codified into 'resource-based view' (e.g., Barney, 1986, 1997: 138-141: Conner, 1991; Montgomery and Wernerfelt, 1988; Peteraf, 1993; Wernerfelt, 1984), resource picking is the main mechanism for the creation of economic rent....
Economics of resource based and dynamic capabilities view: a contemporary framework
The people of Merthyr, Torfaen, Rhondda, Cwmbran and Newport - some of the most deprived areas in Europe - have been beaten by their own socialist representatives, and never had a chance of seeing their interests considered or the implementation of the changes they so desperately need whilst their purported leaders had so much to gain from the perversion of taxing wealth production rather than recouping for the community the economic rent it created.
Transferring wealth; LETTERS
Advocates assert that economic rent, or amounts that exceed compensation for bearing risk, can be generated through inefficiencies in insurance sales, such as insurers' market knowledge and experience in pricing, and policyholders' inability to fully value all the options and guarantees in their contracts.
Measuring up: new standards help insurance companies determine their true value in a changing world
Oil-producing nations typically collect "economic rent" by capturing a percentage of oil taxes, royalties and land sales.
Slip sliding away: compared with Norway's bulging bank account, Alberta's Heritage Fund falls well short of its potential