An increase in the production levels of goods and services. If measured in monetary terms, the increases must occur after adjustments for inflation have been made.
Wall Street Words: An A to Z Guide to Investment Terms for Today's Investor by David L. Scott. Copyright © 2003 by Houghton Mifflin Company. Published by Houghton Mifflin Company. All rights reserved. All rights reserved.

The ability of an economy to produce m ore goods and services on a sustained basis depends on many factors including an increase in the quantity and quality of the labour force. capital stock and natural resources (the basic factor inputs available to it); the efficient use of these resources so as to attain a high level of PRODUCTIVITY; the introduction of new innovative techniques and methods of production and new products. The latter two factors are especially important in the context of a world economy where a country's economic growth rate is materially affected by INTERNATIONAL TRADE influences. Finally, a country's own level of demand needs to be sufficiently buoyant both to ensure the full utilization of its existing resources and to encourage producers to invest in new plant and research and development to enlarge the supply capabilities of the economy over the longer term.

Governments can stimulate the growth process by increasing current spending in the economy through taxation cuts (see FISCAL POLICY) and by increasing the money supply and reducing interest rates (see MONETARY POLICY). Additionally, it can operate on the supply-side of the economy by promoting enterprise initiatives and providing resources for improving productivity and research (see INDUSTRIAL POLICIES). 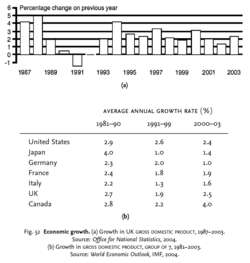 The growth of the real OUTPUT of an economy over time. Economic growth is usually measured in terms of an increase in real GROSS NATIONAL PRODUCT (GNP) or GROSS DOMESTIC PRODUCT (GDP) over time or an increase in INCOME PER HEAD over time. The latter measure relates increases in total output to changes in the population. Therefore, if total output rises only a little faster than the increase in population, then there will be only a small improvement in average living standards. Fig. 52 (a) shows changes in the UK's GDP over the period 1987–2003, and Fig. 52 (b) provides some international comparisons of GDP growth.

The achievement of a high rate of economy growth is one of the four main objectives of MACROECONOMIC POLICY. The significance of economic growth lies in its contribution to the general prosperity of the community. Growth is desirable because it enables the community to consume more private goods and services, and it also. contributes to the provision of a greater quantity of social goods and services (health, education, etc.), thereby improving real living standards. Rapid economic growth, however, can also contribute to the exhaustion of finite natural resources and exacerbate problems of environmental POLLUTION, congestion and ecological damage.

An increase in the growth potential (‘supply side’) of an economy can come about in three highly interrelated ways: (a) more resources:

All three inputs contribute to the growth process, but modern growth theory emphasises the critical role played by capital. The amount of capital is determined by INVESTMENT while the effect of investment in lifting output is shown by the CAPITAL-OUTPUT RATIO. This can be illustrated as follows: the potential rate of growth depends on the proportion of national income that is invested (i) and the capital-output ratio (k) - the amount of capital (K) required to produce one more unit of output (Y) each year: k = K/Y. The formula for growth (g) is given by g = i/k. Thus, if 20% of national income is invested (i = 20%) and if each £1 of new investment produces an extra 25p of income per year (k = 4), then the rate of growth would be 5%;

The ‘demand side’ of an economy is also important. An increase in the economy's potential growth rate can only be taken full advantage of (i.e. potential turned into actual growth) provided the economy is being operated at a high and expanding level of AGGREGATE DEMAND. Keynesian economists in particular place great emphasis on the role of the ACCELERATOR in putting pressure on existing capacity and, by expanding profit opportunities, encouraging businesses to increase investment in new plant and machinery, etc.

Economists often distinguish between ‘exogenous’ and ‘endogenous’ growth impulses. The former embraces developments that emerge from outside the existing economic system and that then impact upon it. Earlier economists (the ‘classical’ school) classified population growth (and thus the size of the labour force) and technological progressiveness in this way, with major surges in growth occurring as a result of periodic inventions (the railway, car, aeroplane, radio and electricity). Endogenous growth comes from within the existing economic system and can arise from ‘spill-over’ effects (e.g adaptation of machinery used originally in one activity to some other industrial use), using increasingly specialized equipment, the experience curve, and from ‘freeing up’ markets (e.g. the elimination of inefficient firms and monopolies, the removal of restrictive labour practices, etc.). In reality, it is not possible to distinguish at the margin between the two growth processes. In particular, technological progressiveness is usually an on-going incremental process involving the continuous investment in R&D by firms and governments rather than a series of ‘one-off shocks. The invention of the microchip and the development of computer-based manufacturing and information technologies, as noted above, are good examples of the spread of incremental know-how and applications.

Feedback
Flashcards & Bookmarks ?
Please log in or register to use Flashcards and Bookmarks. You can also log in with
Flashcards ?
My bookmarks ?
+ Add current page to bookmarks
Mentioned in ?
References in periodicals archive ?
On the other hand, according to preliminary data, the export and import rates have been harmonized and the contribution of foreign trade to overall economic growth was lower compared to the previous year.
BiH CoM - Economic growth in 2018 exceeded three percent
According to a report released in May by London-based IHS Markit, Taiwan's economic growth rate this year will be 2 percent, while the DGBAS earlier this year predicted an annual growth rate of 2.27 percent.
Taiwan's economic growth rate roars to top of Asia's 4 tigers: Tsai
Joel Mokyr identified two variables that mitigate against technological innovation, stalling economic growth. He underlined corruption and political risk as significant hurdles that work against upping the rate of technological innovation.
Technology's role
The IMF also lowered the economic growth projection for the world's strongest economy the USA.
IMF: MACEDONIAN ECONOMY TO GROW 3 PERCENT THIS YEAR
'If the economic growth rate is less than 7% at the end of our term, of course there will be less job creation,' said Bakhtiar when he was asked to comment on relatively low economic growth rate scenario.
New five-year plan faces hard choices
The economic growth rate is proportionally more than the increase in the accumulation rates of human capital, thus, constructing increasing return to scale.
The Role of Human Capital in Economic Development in the Selected Central Asian Countries
This effect, however, hits hard economic growth--if labor taxation relaxation is not set in in this process, with the very goal of stimulating economic growth.
THE IMPACT OF LABOR TAXATION RELAXATION ON ECONOMIC GROWTH
He explained how the industrial sector became the main contributor to the economic growth. About 40 percent of the total domestic investment recorded by BKPM comes from the industrial sector, followed by the tourism sector.
Investment in Industry Sector Savior of Indonesia's Economy
Institutional fundamentals are badly affected by corruption which leads to poor economic growth (Craigwell andWright, 2012).
GOVERNANCE, CORRUPTION AND ECONOMIC GROWTH: A PANEL DATA ANALYSIS OF SELECTED SAARC COUNTRIES
To ensure inclusive and sustainable economic growth, deliberate measures must be put in place.
Inclusive, sustainable growth duty of all
Over the years, the relationship between financial markets and economic growth remain a significant research topic.
Selected Review on the Sub-Components of Financial Market and Economic Growth