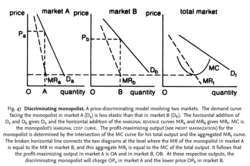 a monopolist (see MONOPOLY) who is sometimes able to increase his profit by dividing his market and charging discriminating prices. Apart from the requirement that the two markets are in some way distinct, such that buyers in one market cannot resell to those being asked a higher price in another market, price discrimination is only worthwhile when the PRICE ELASTICITY OF DEMAND in each market is different. See Fig. 47 . In principle, if a monopolist were able to charge each consumer the maximum amount that the consumer would be willing to pay for each unit bought, then the monopolist would be able to appropriate all the CONSUMER SURPLUS in the form of sales revenue.