A non-cash expense (also known as non-cash charge) that provides a source of free cash flow. Amount allocated during the period to amortize the cost of acquiring long-term assets over the useful life of the assets. To be clear, this is an accounting expense not a real expense that demands cash. The sum of depreciation expenses of prior years leads to the balance sheet item Accumulated Depreciation.
Copyright © 2012, Campbell R. Harvey. All Rights Reserved.

The gradual reduction of an asset's value. It is an expense, but because it is non-cash, it is often effectively a tax write-off; that is, a person or company usually may reduce his/her/its taxable income by the amount of the depreciation on the asset. Because there are many different ways to account depreciation, it often bears only a rough resemblance to the asset's useful life. This may further benefit the company as they may continue to use the asset tax-free after its value has technically depreciated to nothing. See also: Amortization.
Farlex Financial Dictionary. © 2012 Farlex, Inc. All Rights Reserved

The periodic cost assigned for the reduction in usefulness and value of a long-term tangible asset. Because firms can use several types of depreciation, the amount of depreciation recorded on corporate financial statements may or may not be a good indication of an asset's reduction in value. Depreciation not only affects the asset's value as stated on the balance sheet, it also affects the amount of reported earnings. See also Accelerated Cost Recovery System, accelerated depreciation, accumulated depreciation, recapture of depreciation, straight-line depreciation.
Wall Street Words: An A to Z Guide to Investment Terms for Today's Investor by David L. Scott. Copyright © 2003 by Houghton Mifflin Company. Published by Houghton Mifflin Company. All rights reserved. All rights reserved.

Certain assets, such as buildings and equipment, depreciate, or decline in value, over time.

You can amortize, or write off, the cost of such an asset over its estimated useful life, thereby reducing your taxable income without reducing the cash you have on hand. 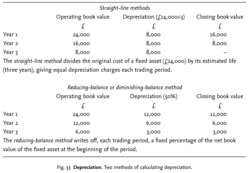 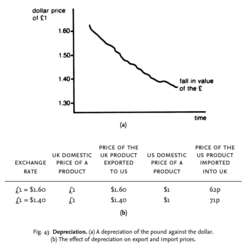 Depreciation is an accounting means of dividing up the historic cost of a FIXED ASSET over a number of accounting periods that correspond with the asset's estimated life. The depreciation charged against the revenue of successive time periods in the PROFIT-AND-LOSS ACCOUNT serves to spread the original cost of a fixed asset, which yields benefits to the firm over several trading periods. In the period end BALANCE SHEET, such an asset would be included at its cost less depreciation deducted to date. This depreciation charge does not attempt to calculate the reducing market value of fixed assets, so that balance sheets do not show realization values.

Depreciation formulas base the depreciation charge on the HISTORIC COST of fixed assets. During a period of INFLATION, however, it is likely that the REPLACEMENT COST of an asset is likely to be higher than its original cost. Thus, prudent companies need to make provision for higher replacement costs of fixed assets. See INFLATION ACCOUNTING, CAPITAL CONSUMPTION, APPRECIATION ?.

(1) In accounting, the process of deducting some portion of the acquisition cost of property over time,as an expense against income,to reflect the fact that the property is becoming less valuable and will eventually require replacement. One cannot allow a $3,000,000 building to remain on the books for 35 years as an asset at the same value and then,suddenly one year,demol-
ish the building, write off $3,000,000 against income for that particular year, and then construct another building or move. (2) In appraisal, a reduction in the calculations for the reproduction cost of an improvement, in order to arrive at a value of the improvement in its current state, not as it would be if it were reproduced and brand new.

Depreciation is the deduction for the reasonable allowance for the wear and tear of assets with a life of more than one year, including real estate but not inventory, used in a trade or business or held for the production of income.
Copyright © 2008 H&R Block. All Rights Reserved. Reproduced with permission from H&R Block Glossary