A branch of accounting that provides information to help the management of a firm evaluate production costs and efficiency.

A branch of accounting that observes and calculates the actual costs of a company's operations. Internal managers, rather than auditors, use cost accounting most of the time to identify aspects of their company where costs can be cut. For example, a manager may enlist a cost accountant to determine the most expensive aspects of his/her business that is, where the money goes. The accountant may make a detailed report so that the manager may make decisions based upon it. Because cost accounting is primarily internal, it need not conform to the Generally Accepted Accounting Principles. It is also called managerial or management accounting. See also: Assurance, Activity-based costing.

The field of accounting that measures, classifies, and records costs. A cost accountant, for example, might be required to establish a system for identifying and segmenting various production costs so as to assist a firm's management in making prudent operating decisions. 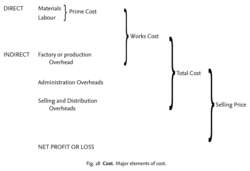 Feedback
Flashcards & Bookmarks ?
Please log in or register to use Flashcards and Bookmarks. You can also log in with
Flashcards ?
My bookmarks ?
+ Add current page to bookmarks
TheFreeDictionary presents:
Write what you mean clearly and correctly.
Mentioned in ?
References in periodicals archive ?
1919: Founding of the National Association of Cost Accountants (NACA) in Buffalo, N.Y.
Our Enduring Legacy: The History of IMA
One of the 20th century's most influential accounting academics was William Paton, who in a 1922 treatise described what he believed to be the cost accountant's chief activity:
Lies, Damned Lies, and Cost Accounting: How Capacity Management Enables Improved Cost and Cash Flow Management
Speaking on the occasion, the President said that cost accountants play a substantial part in enhancing efficiency of processes, particularly in the manufacturing and of capital use.
President Kovind inaugurates Platinum Jubilee Celebrations of Institute of Cost Accountants of India
Our task now (as a legion of cost accountants) is to account for the physical flow of airplanes, determine equivalent units in terms of direct materials, direct labor, and manufacturing overhead, compute costs per equivalent unit, and complete a process costing report for the assembly department using the weighted-average method.
Paper Airplanes, Inc.: utilizing an in-class case to demystify process costing
In the majority of cases, cost accountants either uncritically noted the need to integrate their cost systems with the general ledger or were critical of the effects of this requirement on the quality of information produced for management decision-making.
Professional dominance: The relationship between financial accounting and managerial accounting, 1926-1986
Cost accountants are divided into two groups according to job responsibilities.
The Changing Organizational Structure And Individual Responsibilities Of Managerial Accountants: A Case Study [*]
CMA Sanjay Gupta, president of the Institute of Cost Accountants of India (ICAI) will deliver the welcome address.
Vice President, Senior Cabinet Ministers to Address ICAI National Cost Convention
The 30 financial analysts and cost accountants in the Copy Products Division, for instance, decided to use a NASA-inspired theme to launch its planning process for 1991.
A CFO's view: invest in "quality teams" for decision making
A.S.Durga Prasad has been elected as the new President of the Institute of Cost Accountants of India (ICAI) for the year 2014-15 in a council meeting held at Institute's headquarters in Kolkata.
A.S.Durga Prasad elected new ICAI president
Readers should keep in mind that IMA was originally founded as the National Association of Cost Accountants. Things change, and the original emphasis on cost accounting became subsumed in many other initiatives, such as Ethics, Organizational Behavior, and Budgeting.
Single biggest step
In the private sector, experienced internal auditors and cost accountants should command greater than average salary gains, while starting salaries for high-level financial professionals will register moderate gains in 1990.
1990 accounting salaries