The CPI, as it is called, measures the prices of consumer goods and services and is a measure of the pace of US inflation. The US Department of Labor publishes the CPI every month.

A measure of inflation in the United States that considers what people spend on staple goods and services. It is calculated by taking the average of changes in price to a basket of goods and services compiled by the U.S. Department of Labor. The goods and services in the basket are weighted according to their perceived importance. The CPI is considered a primary tool in determining how people are experiencing inflation.

A measure of the relative cost of living compared with a base period (currently 1982-84). The CPI can be a misleading indicator of the impact of inflation on an individual because it is based on the spending patterns of an urban family of four. Also called price index. Compare producer price index. See also GDP deflator.

The consumer price index (CPI) is compiled monthly by the US Bureau of Labor Statistics and is a gauge of inflation that measures changes in the prices of basic goods and services.

Some of the things it tracks are housing, food, clothing, transportation, medical care, and education.

The CPI is used as a benchmark for making adjustments in Social Security payments, wages, pensions, and tax brackets to keep them in tune with the buying power of the dollar. It's often incorrectly referred to as the cost-of-living index. 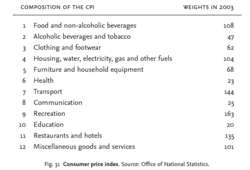 a weighted average of the PRICES of a general ‘basket’ of goods and services bought by consumers. Each item in the index is weighted according to its relative importance in total consumers’ expenditure (see Fig. 31 ). Starting from a selected BASE YEAR (index value = 100), price changes are then reflected in changes in the index value over time. Thus, in the case of the UK's CPI, the current base year is 1996 = 100; in February 2005 the index value stood at 112.2, indicating that consumer prices, on average, had risen 12% between the two dates.

Previously, the RETAIL PRICE INDEX (RPI) was used for this purpose, but the CPI measure was adopted to harmonize the way the UK measured its inflation rate with that of other countries in the EUROPEAN UNION.

A Bureau of Labor Statistics'(www.bls.gov/cpi/) inflation calculator;it is the most widely known index for measuring economic performance and inflation in the United States. The CPI measures and compares the total cost of a statistically determined “typical market basket”of goods and services consumed by U.S.households against the cost for the same goods and services consumed in the base period 1982-1984. The contents of the “market basket” are determined by the Consumer Expenditure Survey of about 10,000 families and their spending habits over a period of time.