In investments, cash flow represents earnings before depreciation, amortization, and non-cash charges. Sometimes called cash earnings. Cash flow from operations (called funds from operations by real estate and other investment trusts) is important because it indicates the ability to pay dividends.

1. Cash that comes into or goes out of a person's or company's account. Cash flow can come from any number of sources and is crucial for a business' continued operation and a person's continued survival. Cash inflow may come from wages, salary, sales, loans, revenue from operations, or even personal gifts. Cash outflow usually comes from expenses and investments. It is crucially important to maintain a positive net cash flow insofar as possible.

2. In accounting, an item on a financial statement indicating cash flow.

The amount of net cash generated by an investment or a business during a specific period. One measure of cash flow is earnings before interest, taxes, depreciation, and amortization. Because cash is the fuel that drives a business, many analysts consider cash flow to be a company's most important financial statistic. Firms with big cash flows are frequently takeover targets because acquiring firms know that the cash can be used to help pay off the costs of the acquisitions. See also free cash flow.
Case Study Financial analysts generally consider cash flow to be the best measure of a company's financial health. Increased cash flow means more funds are available to pay dividends, service or reduce debt, and invest in new assets. On the other hand, reported net income is heavily influenced by a firm's accounting practices. Reduced income generally means lower taxes and more cash, thus the same accounting practices that reduce net income can actually increase cash flow. A firm with large amounts of new investments and corresponding high depreciation charges might report low or negative earnings at the same time it has large cash flows to service debt and to acquire additional assets. Cable companies have huge investment requirements and are typical of firms that may be quite healthy in spite of reporting net losses. In early 1996, TCI Communications, at the time the nation's largest cable operator, reported fourth-quarter results that included a net loss of $70 million, more than double the loss reported in the year-earlier quarter. At the same time, the firm added more than a million new customers and reported a 25% increase in revenues. It also reported a 5% increase in cash flow. Thus, although TCI reported an additional loss, the quarter was generally considered quite successful. Operating cash flow, calculated as cash flow (the sum of net income and noncash expenses such as depreciation, depletion, and amortization) plus interest expense plus income tax expense, is an important consideration in corporate acquisitions because it indicates the cash flow that is available to service a firm's debt.

Cash flow is a measure of changes in a company's cash account during an accounting period, specifically its cash income minus the cash payments it makes.

Investors often consider cash flow when they evaluate a company, since without adequate money to pay its bills, it will have a hard time staying in business.

You can calculate whether your personal cash flow is positive or negative the same way you would a company's. You'd subtract the money you receive (from wages, investments, and other income) from the money you spend on expenses (such as housing, transportation, and other costs).

If there's money left over, your cash flow is positive. If you spend more than you have coming in, it's negative. 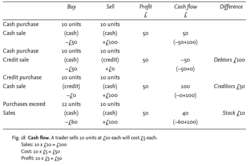 the money coming into a business from sales and other receipts and going out of the businesses in the form of cash payments to suppliers, workers, etc. Cash receipts and cash payments in a trading period are not necessarily the same as the accounting revenues and cost applicable to that same period, because customers need not pay cash for goods sold until some time afterwards while the firm may not pay for materials and services used until afterwards. Fig. 18 overleaf shows the main causes of disparities between cash flow and profit. See SOURCES AND USES OF FUNDS STATEMENT.

the money coming into a business from sales and other receipts and going out of the business in the form of cash payments to suppliers, workers, etc.

(1) Noun:The cash available from an investment after receipt of all revenues and after payment of all bills.(2) Verb:The process of creating cash flow,as in “I think that property will start to cash flow in about a year.”A property can have positive cash flow (good) or negative cash flow (usually bad).Cash flow is not the same thing as profitability.A property can be profitable,meaning gross income less expenses, depreciation, and interest on debts results in a positive number. That same property can have a negative cash flow because of the need to pay principal payments on loans or expend money for something that represents a capital expenditure,like a new roof.

Feedback
Flashcards & Bookmarks ?
Please log in or register to use Flashcards and Bookmarks. You can also log in with
Flashcards ?
My bookmarks ?
+ Add current page to bookmarks
TheFreeDictionary presents:
Write what you mean clearly and correctly.
Mentioned in ?
References in periodicals archive ?
Therefore it is not surprising that free cash-flow measure is the basic measure for the discounted cash-flow model deployed in capital investment projects and in the capital budgeting process including the M&A process.
Evaluating a cash flow statement
The cash-flow market tends to work better with companies that have larger EBITDAs.
CIT EXEC: ASSET-BASED FACILITIES OFFER BETTER FLEXIBILITY THAN CASH-FLOW LOANS
Here are some basic steps to preparing a cash-flow budget:
Impress lenders with cash-flow sense. (Business Financing)
Lenders who want to book these loans are being a bit more flexible in underwriting property cash-flows. And they are setting up deal structures that give borrowers maximum cash today, plus maximum protection from future market shifts.
Hotel lending: a snapshot of the market
The entrepreneur must produce projected operating and cash-flow statements for three years.
How to secure a line of credit for your business
Management may conclude that the best way to make the company cash-flow positive is to merge it with a complimentary business.
Managing a successful turnaround even in tight capital markets: the team navigating a turnaround must go way beyond reducing headcount alone and focus on seven steps to change the company's direction and improve its cash flow and profitability
To begin, cash-flow enhancements are the result of income-tax savings through accelerated tax deductions from premium payments.
Pickup Trucks and Captives
"But we wanted some kind of cash-flow relief to the buildings to continue," she said.
Energy Office is folded; payments re-arranged
A month-by-month analysis will pinpoint seasonal fluctuations in market demand and potential cash-flow problems, as well as the best time of year to buy the new piece of equipment your company needs.
Slowdown may hurt some businesses, but others will profit
131, Disclosures about Segments of an Enterprise and Related Information -- or one level below an operating segment, referred to as a component.) It's a two-step test that first determines whether the book value of the reporting unit's acquired assets exceeds the unit's so-called fair value -- typically measured through discounted cash-flow estimates.
The New Demands of Cash Flow Reporting