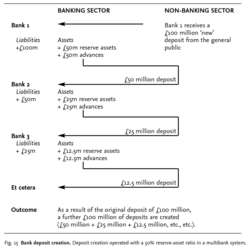 the ability of the COMMERCIAL BANK system to create new bank deposits and hence increase the MONEY SUPPLY. Commercial banks accept deposits of CURRENCY from the general public. Some of this money is retained by the banks to meet day-to-day withdrawals (see RESERVE-ASSET RATIO). The remainder of the money is used to make loans or is invested. When a bank on-lends, it creates additional deposits in favour of borrowers. The amount of new deposits the banking system as a whole can create depends on the magnitude of the reserve-asset ratio. In the example set out in Fig. 15, the banks are assumed to operate with a 50% reserve-asset ratio: Bank 1 receives initial deposits of £100 million from the general public. It keeps £50 million for liquidity purposes and on-lends £50 million.

This £50 million, when spent, is redeposited with Bank 2; Bank 2 keeps £25 million as part of its reserve assets and on-lends £25 million; and so on. Thus, as a result of an initial deposit of £100 million, the banking system has been able to ‘create’ an additional £100 million of new deposits.

Since bank deposits constitute a large part of the MONEY SUPPLY, the ability of the banking system to ‘create’ credit makes it a prime target for the application of MONETARY POLICY as a means of regulating the level of spending in the economy

Feedback
Flashcards & Bookmarks ?
Please log in or register to use Flashcards and Bookmarks. You can also log in with
Flashcards ?
My bookmarks ?
+ Add current page to bookmarks
Mentioned in ?
References in periodicals archive ?
For these countries, commercial bank deposit creation lies somewhere between monopoly and competition (see Figure 1).
The Case for Central Bank Electronic Money and the Non-case for Central Bank Cryptocurrencies