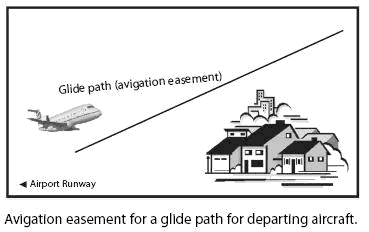 An easement obtained by airport authorities, through purchase or condemnation,and used to provide clear access for low-flying aircraft on the glide path.

Feedback
Flashcards & Bookmarks ?
Please log in or register to use Flashcards and Bookmarks. You can also log in with
Flashcards ?
My bookmarks ?
+ Add current page to bookmarks
Mentioned in ?
References in periodicals archive ?
3d 112, the acquiring agency sought to acquire an avigation easement over a property adjacent to an airport.
The art of easements: appraisers can play a key role in defining the scope of the acquisition
In cases where an airport has continually operated for several years, a municipality could argue that it has a prescriptive avigation easement as a defense to a takings claim.
2d Aviation [section] 8 (2009) (noting that "[t]here is a conflict of authority as to whether an avigation easement may be obtained by prescription").
(233.) At least one case has applied a six year statute of limitations to preclude a takings claim for an avigation easement against the United States Government, with the six-year period beginning to toll when aircraft began flying over the subject property.
Airspace and the takings clause
The property was subject to an earlier avigation easement granted to the U.S.
Owner must provide evidence of property value loss due to overflight effects. (Cases in Brief)
The avigation easement brings with it the threat of thundering planes, immense downfalls of soot and fuel leakage, shock waves that rattle pots and pans, restrictions on home lighting, height limitations, perpetual and continuing rights to all air space and underlying ground to ensure the safe and continuing fight of all aircraft to fly over the property.
An owner is approached by a representative of the airport and asked to agree and sign an avigation easement document.
The Infamous Avigation Easement