Any communication designed to raise awareness and produce a desired effect. An advertisement may occur through any medium, be that print, broadcast, imagery, or even word of mouth. Many advertisements are basic; for example, there may be a radio announcement to "buy X." Others are more complex, encouraging purchase by stating a product has a better price and/or better quality. Many advertisements are intended to entertain. They are an integral part of marketing. Informally, an advertisement is called an advert or an ad.

A means by which a seller of a BRAND of good or service attempts to increase its sales by communicating with BUYERS, informing them of the nature and attributes of the brand and persuading them to buy it in preference to competitors' brands. Advertising comprises part of a firm's PROMOTIONAL MIX and is undertaken in a variety of ways, including the use of mass MEDIA channels such as television, national newspapers and magazines, posters, websites etc., and more targeted approaches through ‘special interest’ magazines and trade journals, and regional and local newspapers.

Although some advertising is largely concerned with providing buyers with information about the product, the majority of advertising is ‘persuasive’ in intent. Persuasive advertising aims to encourage consumers to purchase products, and the skill of advertising copywriters lies in designing ADVERTISEMENTS which are visually attractive and which appeal to deep-seated consumer motivations, both physical and psychological. If advertisements appeal sufficiently to consumer motives they will encourage repeat buying of the product, thereby establishing BRAND LOYALTY and increasing or maintaining the firm's MARKET SHARE.

The selection of the advertising medium will depend upon the MARKET or market segment which is being targeted (see MARKET SEGMENTATION) and the relative costs and effectiveness of using different media. For example, in respect of specialized INDUSTRIAL BUYERS advertisements may be placed in appropriate trade/professional journals. On the other hand, if large numbers of final consumers are being targeted, it may be more cost-effective to use the mass media which, although more expensive in absolute terms, actually costs less per potential customer reached. 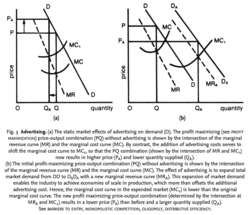 (b) The initial profit-maximizing price-output combination (PQ) without advertising is shown by the intersection of the marginal revenue curve (MR) and the marginal cost curve (MC). The effect of advertising is to expand total market demand from DD to DADA with a new marginal revenue curve (MRA). This expansion of market demand enables the industry to achieve economies of scale in production, which more than offsets the additional advertising cost. Hence, the marginal cost curve in the expended market (MC1) is lower than the original marginal cost curve. The new profit maximizing price-output combination (determined by the intersection at MRA and MC1) results in a lower price (PA) than before and a larger quantity supplied (QA).

a means of stimulating demand for a product and establishing strong BRAND LOYALTY. Advertising is one of the main forms of PRODUCT DIFFERENTIATION competition and is used both to inform prospective buyers of a brand's particular attributes and to persuade them that the brand is superior to competitors’ offerings.

There are two contrasting views of advertising's effect on MARKET PERFORMANCE. Traditional ‘static’ market theory, on the one hand, emphasizes the misallocative effects of advertising. Here advertising is depicted as being solely concerned with brand-switching between competitors within a static overall market demand and serves to increase total supply costs and the price paid by the consumer.

This is depicted in Fig. 3 (a). (See PROFIT MAXIMIZATION).

The alternative view of advertising emphasizes its role as one of expanding market demand and ensuring that firms’ demand is maintained at levels that enable them to achieve economies of large-scale production (see ECONOMIES OF SCALE). Thus, advertising may be associated with a higher market output and lower prices than allowed for in the static model. This is illustrated in Fig. 3 (b).

Feedback
Flashcards & Bookmarks ?
Please log in or register to use Flashcards and Bookmarks. You can also log in with
Flashcards ?
My bookmarks ?
+ Add current page to bookmarks
TheFreeDictionary presents:
Write what you mean clearly and correctly.
Mentioned in ?
References in periodicals archive ?
By only a three to two majority, the judges in the end upheld the Quebec legislation and found Irwin Toy subject to the advertizing restrictions.
This advertizing ban rationally connects to protecting children and amounted to a minimal impairment of Irwin Toy's free expression rights.
Whatever happened to ... the Irwin Toy Company
These marketing tools can be programmed to appear regularly on set dates and times, and be remotely controlled by the advertizing company.
Javna foresees improvement in the mobile advertising sector
So, as the attempt at national economic recovery proceeds, the advertizing industry can be expected to see a positive growth trend in the future.
The involvement of foreign companies in the national advertizing service business is limited only to the provision of technical/managerial assistance.
On the broader outline, the activity of advertizing involves three major components: advertizers, agencies, and mass-medias.
From the perspective of media, an advertizing agency serves as an extension to them in seeking and supplying ads, which they require to finance their production cost.
NATIONAL ADVERTIZING BUSINESS SHOWS SIGNS OF RECOVERY
CTC Media's 1Q10 results will likely show improvements over 2009, when advertizing budgets in Russia fell 38% YoY.
Uralsib - Russia Equity Research - CTC Media - 1Q10 US GAAP Preview; Relatively Weak Quarter to Come - Apr 27, 2010
Therefore, the growth in ad standing has been slowing down because much of the funds for advertizing is now used to finance direct promotion campaigns in the form of discounts, gifts, exhibitions, and free services.
The remaining 6.6% or Rp 316 billion will be shared by cinemas and outdoor advertizing media.
Generally, daily necessity products such as pain reducers (analgesics), processed food products, and soft drinks tend to use, television as their advertizing medium.
Complementary to television and printed media for advertizing purposes is the radio, which is found nearly in every pan of Indonesia.
3. 1997'S AD SPENDING REACHES RP 5 TRILLION WITH COMMERCIAL TV AS THE LARGEST PLAYER