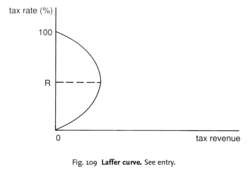 a curve depicting the possible relationship between INCOME TAX rates and total TAX revenue received by the government. Fig. 109 shows a typical Laffer curve. As tax rates per pound of income are raised by the government, total tax revenue, or yield, initially increases. If tax rate is increased beyond OR, however, then this higher tax rate has a disincentive effect so that fewer people will offer themselves for employment (see POVERTY TRAP) and existing workers will not be inclined to work overtime. The result is that the tax base declines and government tax receipts fall at higher tax rates. The possible Laffer curve relationship has been used by governments in recent years as a justification for cuts in tax rate as part of a programme of work incentives (see SUPPLY-SIDE ECONOMICS).
Collins Dictionary of Economics, 4th ed. © C. Pass, B. Lowes, L. Davies 2005

Feedback
Flashcards & Bookmarks ?
Please log in or register to use Flashcards and Bookmarks. You can also log in with
Flashcards ?
My bookmarks ?
+ Add current page to bookmarks
Mentioned in ?
References in periodicals archive ?
(37.) Slemrod (1998a) and Slemrod and Kopczuk (1998) have emphasized that the taxable income elasticity will depend directly on the enforcement regime and other aspects of the tax system.
Evidence on the High-Income Laffer Curve from Six Decades of Tax Reform
(Burns and Ziliak 2016) In light of this new evidence, in the discussion and tables that follow, I assume a taxable income elasticity of 0.4, the midpoint between Saez et al.
Tax reform: Ryan-Brady plan is a better way
They brought the concept of taxable income elasticity to the fore and showed how it could be measured empirically.
Innovation and the long-run elasticity of total taxable income
However, taxpayers were apparently much more responsive to tax rate changes in 1979 than 1991, because Long and Gwartney concluded that in 1979, the taxable income elasticity with respect to the marginal tax rate was probably in the -0.6 to -1.5 range for incomes above $60,000.
The impact of marginal tax rates on taxable income: evidence from state income tax differentials