(redirected from Rule of one-half) 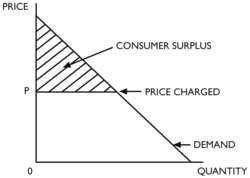 a difference between the price the consumer is actually required to pay for a product compared to the price the consumer would be prepared to pay. In Fig 25, which shows a downward-sloping demand curve for a product, the price charged is indicated by P. The shaded area above P represents the consumer surplus. To illustrate: you are a Manchester United Football fan; tickets for a home game are currently priced at £50 but you would be willing to pay £75. Hence you have ‘received’ as a consumer a ‘perceived benefit’ or ‘surplus’ of £25 over and above the price actually charged.

Business strategists can use the concept of the consumer surplus to increase the firm's profits and COMPETITIVE ADVANTAGES over rival suppliers (see VALUE CREATED MODEL). For example, in the case of Manchester United instead of charging a single price of £50 it could segment its market, charging different prices for admission to different parts of the ground. (See PRICE DISCRIMINATION, MARKET SEGMENTATION) in order to ‘capture’ more of the consumer surplus for itself. Thus, it could continue to charge the ‘basic’ price of £50 for admission to certain parts of the ground; £75 for seating in the main stand and £120 for an ‘executive box’ seat. Similarly, BSkyB the television broadcaster offers subscribers not only a basic ‘variety’ package of some 75 channels but other extra pay channels such as Sky Sports 1,2 and 3 and the movie channel.