An idealized market environment in which every market participant is too small to affect the market price by acting on its own.
Copyright © 2012, Campbell R. Harvey. All Rights Reserved. 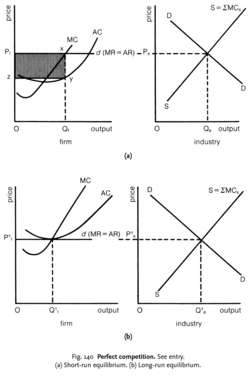 A type of MARKET STRUCTURE characterised by:

In a perfectly competitive market, individual sellers have no control over the price at which they sell, the price being determined by aggregate market demand and supply conditions. Each firm produces such a small fraction of total industry output that an increase or decrease in its own output will have no perceptible influence upon total supply and, hence, price. Further, given the infinite cross ELASTICITY OF DEMAND between the homogeneous outputs of the competing sellers, no seller can increase his price above the ruling market price without losing all his custom. Thus, the demand curve facing the firm will be a horizontal straight line at the ruling market price. In consequence, marginal revenue (MR) equals average revenue (AR). The competitive firm is a price taker, accepting price as something completely outside its control, and will simply adjust its output independently to the most profitable level at that price; that is, the firm will continue to produce additional units of output so long as price (= MR = AR) exceeds marginal cost. When these are equated, the firm will maximize profits. Fig. 140 (a) shows the short-run competitive-equilibrium position for a ‘representative’ firm and the industry.

The individual supply schedules (MCs) of x’ number of identical firms are summed horizontally to obtain the industry supply curve (SS). Given industry demand (DD), the short-run equilibrium price and output are Pe and Qe. Taking the equilibrium price as given, the competitive firm establishes its profit-maximizing output at the level Qf (P = MC) and, in this case, realizes ABOVE-NORMAL PROFITS (Pfxyz).

The long-run equilibrium position can also be ascertained. It is deduced, from the assumptions of profit maximization, perfect knowledge and free entry and exit, that, unless the returns to the productive resources employed in the industry are at a level that could be derived from alternative uses elsewhere in the economy, there will be resources entering or leaving this industry. In general, outputs will be adjusted to demand until market output is extended (or reduced) and price reduced (or increased) to the point where the average cost of supplying that output is just equal to the price at which that output sells.

If, as in the example above, established sellers are earning above-normal profits, then new resources will be attracted into the industry, thereby increasing total market supply and reducing market price. This process will continue until the excess profits have been competed away. Fig. 140 shows the long-run competitive equilibrium position for the ‘representative’ firm and the industry. Given an unchanged industry demand (DD), the long-run equilibrium price and output for the industry are P1e and Q1e. Given the equilibrium price, the firm establishes its profit-maximizing output at the point Q1f, where P = MC at the point of minimum long-run average cost.

Static market theory shows perfect competition to result in a more efficient MARKET PERFORMANCE than other forms of market organization (see especially the comparison with MONOPOLY). Specifically, market output is optimized at a level equal to minimum supply costs; consumers are charged a price just equal to minimum supply costs, with suppliers receiving a NORMAL PROFIT return. The conclusion of competitive optimality, however, rests on a number of assumptions, some of which are highly questionable, in particular the assumption that cost structures are identical for small perfectly competitive firms and large oligopolistic and monopoly suppliers (see OLIGOPOLY, ECONOMIES OF SCALE), while, given its static framework, it ignores important dynamic influences, such as TECHNOLOGICAL PROGRESS. See also MONOPOLISTIC COMPETITION.

Feedback
Flashcards & Bookmarks ?
Please log in or register to use Flashcards and Bookmarks. You can also log in with
Flashcards ?
My bookmarks ?
+ Add current page to bookmarks
Mentioned in ?
References in periodicals archive ?
As the solution to the contemporary social-economic crisis, current conservative theoretical-political positions are defending a return to a conception of the market as an impartial, impersonal, depoliticized and technical structure based on pure competition and meritocracy.
Development as inclusive social participation: beyond the conservative systemic comprehension of social evolution/Desenvolvimento como participacao social inclusiva: para alem da compreensao sistemica conservadora da evolucao social
He had a blackboard in his office and once, in the heat of discussion with some of us, he allowed me to write something on it that I thought was quite profound at the time: I wrote: "There is no competition in pure competition." When I finished writing Weiner just looked at me like I was from another planet and he shook his head.
Antitrust myths: speak truth to power
Chamberlin, said the following in explaining the nuances and subtleties of monopolistic competition in contrast to pure competition:
Internal capabilities, external relationships, and firm-level strategies: their impact on reputation
Particular behaviors exist on a continuum of pure competition on one end and pure cooperation on the other.
Strategy for Coaches 2011 Webcast Schedule
Finally, there should be closer cooperation and coordination (not just pure competition) among the different regional initiatives to build scale and capitalize on joint investments'
INSEAD Highlights The Impact of Universities' Knowledge Transfer on Economic Development
Joan Robinson's first major work, The Economics of Imperfect Competition, was published in 1933 and used for many years subsequently as a textbook alerting students to the fact that the Marshallian and Pigovian categories of pure competition and monopoly were applicable to very few industries.
G.C. Harcourt and Prue Kerr. Joan Robinson
We're told that winning isn't everything, that cheats never prosper, that a desire to win at all costs is the province of cold-eyed, cold-hearted fanatics who have lost sight of the beauty of pure competition. Fine words, but somewhere along the line we discover that life isn't like that.
Winning is ever ything - just don't tell me the result
The second main paradox is that the rules of pure competition have to be enforced by an administrative body, the regulation Agency.
John URE (Ed.): Telecommunications Development in Asia
Yet, from a social perspective, we are here dealing with pure competition as a form that is channelled through the object and the third party, for even advertising serves the public, provided it tells them nothing but the truth.
Sociology of competition
It is pure competition and people come to enjoy that.
Fighters heading for a battle in the Toon; Martial arts stars to take on boxers in fast-growing sport