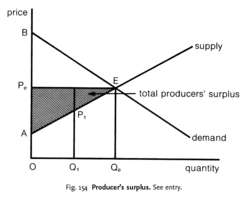 the extra earnings obtained by a producer from receiving a price for a good that is higher than the price at which he would have been prepared to supply.

Since producers are not equally efficient in supplying goods, a market price that is just sufficient to induce the ‘intra-marginal’ producer (i.e. the least efficient producer) to remain a supplier will simultaneously result in more efficient producers earning producer's surplus.

Producer's surplus is directly analogous to CONSUMERS’ SURPLUS and is shown in Fig. 154, where the EQUILIBRIUM MARKET PRICE is OPe. At any point along the segment of the supply curve AE, producers would be willing to supply the appropriate quantity and would receive a greater price, OPe, than the price that they would be prepared to sell at. For example, one producer would be prepared to supply the intra-marginal quantity OQ1 at a price of OP1, although in fact he receives the market price OPe, giving a producer's surplus, P1Pe. The total of all such producers’ surpluses is indicated by the shaded area APe E.

In PERFECTLY COMPETITIVE markets only the most efficient producers are able to survive, and since the equilibrium market price is only just sufficient to cover suppliers’ costs (including a NORMAL PROFIT return), the producer's surplus is zero. By contrast, in imperfect markets such as OLIGOPOLY, the tendency for market prices to be higher than the costs of the intra-marginal supplier may enable some suppliers to secure a producers’ surplus.

Feedback
Flashcards & Bookmarks ?
Please log in or register to use Flashcards and Bookmarks. You can also log in with
Flashcards ?
My bookmarks ?
+ Add current page to bookmarks
References in periodicals archive ?
To go back to the relationship between the impact of digitalization and GDP statistics, the key point is that the producer's surplus is quantified and reflected in GDP statistics but the consumer's surplus, given its subjective nature, is not measured and therefore goes unaccounted for.
Digital Capitalism and Japan
--the producer's surplus (PS), graphically defined by the area between the price line and the supply curve, is calculated as the difference between the revenues obtained by selling a quantity of the product and the costs necessary for the making of this quantity; in this undertaking we will consider the producer's surplus as a sum of the two components, even though the data presentation mentions the producer and the distributor separately: PS = PM + DM and [DELTA]PS = PSF - PSI, where PSI is the surplus before the implementation of the clawback tax and PSF is the surplus after the implementation.
Inconsistency of legal provisions: failure in introducing the clawback tax on the Romanian medicines market
This increase in the production of rice would have generated a gain of producer's surplus of Rs 3708 million.
Impact of WTO's trade liberalisation on selected food crops in Pakistan
Since the expected value of producer's surplus net of cost of entry is zero, the expected value of total surplus equals that of consumer's surplus.
Dynamic implications of capital market perfection
Thus, the sum of price changes times cars sold, or the average price change times total units sold, equals the amount of producer's surplus lost in a competitive market.
Short-run pricing strategies to increase corporate average fuel economy
For example, Mishan (1968) recommends that the term "producer's surplus" be struck from the economist's vocabulary (p.
Instinctive behaviour, producer surplus, and corporate social responsibility
An even stronger result is available if one assumes that the expected value of producer's surplus net of cost of entry is zero in every industry due to entry by new firms.
Consumer's surplus in monopolistic competition a la Dixit and Stiglitz
Human capital being the key factor in the process of economic growth and welfare, the rate of return on investment in nourishment of the population of an underdeveloped country, both tangible and intangible, cannot be measured in terms of the producer's surplus or the maximisation of the producer's welfare at the farm level and this is what the paper exactly does.
Economic analysis of the effects of wheat price distortions in Pakistan: 1975-90
where PS is the producer's surplus in the agricultural market, and w is the quantity of water demanded.
A note on optimal pricing of publicly produced intermediate inputs
The paper uses traditional supply-and-demand-curves to calculate the gains and losses to different economic agents in the society in terms of consumer's surplus or producer's surplus. Wherever possible, direct estimates of revenue changes have also been worked out.
Agricultural prices in Pakistan: a multimarket analysis
Financial browser ?
Full browser ?
CITE
Site: Follow: Share:
Open / Close