Government intervention to set an artificially high price through the use of a price floor designed to aid producers.
Copyright © 2012, Campbell R. Harvey. All Rights Reserved.

A government subsidy that keeps the price for a good or service higher than it otherwise would be. For example, the government may set a price support for milk by mandating that suppliers may not accept anything less than the stated price. Price supports exist to protect the livelihoods of suppliers who cannot afford a price war or anything approaching one; many economists oppose price supports because they claim they interfere with competition and the free market.
Farlex Financial Dictionary. © 2012 Farlex, Inc. All Rights Reserved 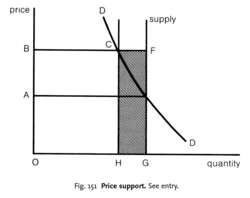 a means of supporting the income of certain producers by administratively maintaining the PRICES of their products above market price. In many countries, price support systems are used specifically to assist the agricultural sector by ensuring an adequate level of total farm incomes. In Fig. 151, the EQUILIBRIUM MARKET PRICE is OA. If this price is considered too low to adequately remunerate farmers, the government will set a support price, say OB, at which it is prepared to buy up any unsold output. At the support price of OB, the government is then committed to acquiring the unsold output of CF at a total cost equal to the shaded area CFGH. The main problems with the price support method are that it penalizes consumers and results in wasteful overproduction. The price support method is used as the basis of the COMMON AGRICULTURAL POLICY of the European Union. Compare INCOME SUPPORT. See also AGRICULTURAL POLICY, BUFFER STOCK.
Collins Dictionary of Economics, 4th ed. © C. Pass, B. Lowes, L. Davies 2005

Feedback
Flashcards & Bookmarks ?
Please log in or register to use Flashcards and Bookmarks. You can also log in with
Flashcards ?
My bookmarks ?
+ Add current page to bookmarks
Mentioned in ?
References in periodicals archive ?
Keywords: Agricultural commodities, Agricultural policy, China, Price supports, Target prices, U.S.-China trade
China's Evolving Agricultural Support Policies
For the longer term, the Federation--after extensive consultation with its members--unveiled Foundation for the Future, a plan to end price supports and focus instead on insuring producer margins.
Legacy of leadership: National Milk Producers Federation celebrates 100 years of service to dairy farmers, co-ops
The Dairy Product Price Support Program supports the price of fluid milk at $9.90 per cwt.
Major changes ahead for U.S. dairy policy
Department of Agriculture in July announced a temporary increase in the amount paid for dairy products through the Dairy Product Price Support Program, left Holmes and more than 100 New Hampshire dairy farmers breathed a sigh of economic relief.
Dairy farmer Jeff Holmes
Department of Agriculture's Dairy Price Support Program is designed to moderate price swings.
Dairy farmers need help
The House energy bill also blesses a southern route; but it includes no price supports. Bush's position on price supports will be critical when the Senate and House "conference" their bills.
Abraham ratchets up natural gas concerns. (Washington Watch)
As in the past, the new farm bill has a direct impact on the financial condition of Montana's farmers through specific income and price support mechanisms for wheat and feed grain commodities.
Outlook for Montana agriculture. (Agriculture)
In the European Union, the OECD's index of farm support rose to 49 per cent in 1999 from 45 per cent the previous year despite a reduction of price support in monetary terms, as the value of production fell.
Farm post: Rich nations reap additional support despite long-term risks
The first and foremost problem with the European farm policies is that they were based on high farm price supports. In an era when farmers were getting access to high-tech, high-yield, off-farm inputs, high prices simply stimulated the farmers to invest in more inputs.
Europe's bad farm policies
Price supports are predicated on a desire to preserve outdated standards of living.
Glut check: overcapacity in Europe and beyond
A complicated system of price supports and quotas has led to the situation today where three-quarters of French farm income come from Paris and Brussels.
Peasantry and Society in France since 1789
Made to order for the grain traders and agrochemical companies that operate in the "global economy," these proposals aim both to eliminate farm price supports and production controls, and to attempt to force all member nations to conform to health and safety standards that would be set in Rome by Codex Alimentarius, a group of international scientific bureaucrats that is under the influence of the agribusiness corporations.
GATT: a bad big idea