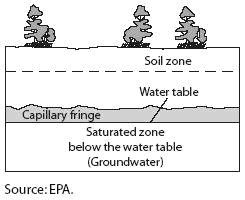 The upper limit of the saturated area of the earth containing groundwater.The water table will be at varying depths depending on location and time of year.

Feedback
Flashcards & Bookmarks ?
Please log in or register to use Flashcards and Bookmarks. You can also log in with
Flashcards ?
My bookmarks ?
+ Add current page to bookmarks
Mentioned in ?
References in periodicals archive ?
The perched water table during the second storm occupied isolated areas with less connectivity to the stream, as indicated by areas of yellow (unsaturated) and green (saturated) intersecting the blue flow lines (fig.
Research connects soil hydrology and stream water chemistry in California oak woodlands
The level of the perched water table in the raised beds, however, exceeded a depth of 0.05 m only for about 2 h on 12 July and 18 August at Woodanilling and not at all at Beverley, while the level of the perched water table in the control frequently reached the soil surface.
In 1997 at Cranbrook, transects of the perched water table were obtained at right angles to interceptor drains.
The effect of raised beds on soil structure, waterlogging, and productivity on duplex soils in Western Australia
The piezometric data from elsewhere in the landscape also indicate that there is a second perched water table on top of the pallid zone; the piezometer at 3.2 m depth, on top of the pallid zone, had a short period of saturation even during the relatively dry winter of 1987 (Fig.
When using Isbell, salinisation (marked presence of sodium), the presence of plinthite (indicating a potential perched water table), and the marked presence of ironstone gravel are reflected in the soil names.
Interpretation of morphological features in a salt-affected duplex soil toposequence with an altered soil water regime in western Victoria
The second perched water table, in the second hydromorphic subsystem on top of the pallid zone, shows a less sensitive, slightly delayed response, caused by the retarding effect on downward movement of water of the relatively impermeable mottled zone above it.
As a consequence, less water flowed down towards the top of the pallid zone, and the perched water table at about 3.5 m depth hardly formed.
Restricting layers, flow paths, and correlation between duration of soil saturation and soil morphological features along a hillslope with an altered soil water regime in western Victoria
Data show perched water tables did occur fairly frequently, most likely on top of restrictive subsoil clay horizons.
Solute transport in seasonal perched water tables in loess-derived soilscapes.
Hydrology and groundwater nutrient concentrations in a ditch-drained agroecosystem