A price charged by the dominant producer that becomes the price adopted by all the other producers.

A situation in which a company sets a price for a product and this company's market share and/or brand loyalty is so strong that other companies are compelled to match or beat the price. The company that first changes the price is said to show price leadership.

a situation where a particular supplier is generally accepted by other suppliers as the ‘lead’ firm in changing market PRICES. Price leadership systems are often seen by suppliers as a useful way of coordinating their price policies so as to limit price competition and avoid ruinous price wars (see OLIGOPOLY). They may, however, act as a cloak for COLLUSION, and as such operate in a way detrimental to the interests of consumers. See MARKET CONDUCT, COMPETITION POLICY. 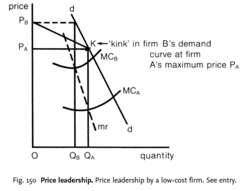 a means of coordinating oligopolistic price behaviour (see OLIGOPOLY), allowing firms whose fortunes are MUTUALLY INTERDEPENDENT to secure high profits. One example of price leadership is that of leadership by a DOMINANT FIRM (a dominant firm-price leader) possessing cost advantages over its competitors. In Fig. 150, firm A is the low-cost supplier, with a MARGINAL COST CURVE MCA; firm B has higher costs, with a marginal cost curve MCB. The individual demand curve of each firm is dd when they set identical prices (that is, it is assumed that total industry sales at each price are divided equally between the two firms); mr is the associated MARGINAL REVENUE curve. Firm A is able to maximize its profits by producing output OQA (where MCA = mr) at a price of OPA. Firm B would like to charge a higher price (OPB), but the best it can do is to ‘accept’ the price set by firm A, although this means less than maximum profit. For given firm B's conjecture about the reactions of firm A to any price change by itself, any alternative course of action would mean even less profit. If it were to charge a higher price than PA, it would lose sales to firm A (whose price is unchanged), moving left along a new ‘kinked’ demand curve segment KPB; if it were to cut its price below PA, this would force firm A to undertake matching price cuts, moving right along the demand-curve segment Kd. Firm B could not hope to win such a ‘PRICE WAR’ because of its higher costs. Thus, firm B's best course of action is to charge the same price as that established by firm A.

Although price leadership systems are used by suppliers to avoid ruinous price competition, they may, however, act as a cloak for COLLUSION, leading to higher prices that exploit consumers. See COMPETITION POLICY.

Feedback
Flashcards & Bookmarks ?
Please log in or register to use Flashcards and Bookmarks. You can also log in with
Flashcards ?
My bookmarks ?
+ Add current page to bookmarks
TheFreeDictionary presents:
Write what you mean clearly and correctly.
Mentioned in ?
References in periodicals archive ?
(57) An example for this argument can be found in a comprehensive study of RPM that the Federal Trade Commission conducted from 1929-1931, which finds loss leader pricing as the "principal argument" of manufacturers in favor of RPM.
The image theory: RPM and the allure of high prices
While same-store sales advanced just 2% in the same period, chairman and chief executive officer David Bloom notes that the company has reduced its reliance on loss leader pricing as a traffic generator and has posted reduced sales of some low-margin merchandise (soft drinks, paper goods and household chemicals) as a result.
SDM solidifies No.1 position
For instance, the trend should neutralize the draw of loss leader pricing by competing trade classes.
Changing marketplace means opportunity as well as challenge