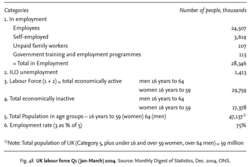 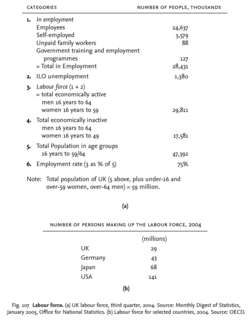 Feedback
Flashcards & Bookmarks ?
Please log in or register to use Flashcards and Bookmarks. You can also log in with
Flashcards ?
My bookmarks ?
+ Add current page to bookmarks
Mentioned in ?
References in periodicals archive ?
Cai Fang: The key to turn the advantage of labour force into an economic advantage and finally a comparative advantage in the international market is reform.
Pakistan, the exact experimental ground for Flying Geese Model
The labour force has increased from 59.74 million in 2012-13 to 60.0 million in 2013-14.
An Empirical Analysis of Male Labour Force Participation in District Lahore
Adding Persons in time-related underemployment to Unemployed Person (ILO2013), and dividing it by the Labour Force, gives the Labour Underutilization Indicator 2 (LU2).
New Indicator of Japan's Unemployment Rate
They employ foreigners because there is an insufficient labour force on the local market (40 percent of respondents) and also because local jobseekers have wage requirements exceeding their abilities and skills (29 percent), do not have proper work ethic (21 percent) or qualification (11 percent).
Companies turn down orders due to labour shortage
Though the report tries to give a broader province-wide perspective of the labour force and employment situation, it does not analyse the job market in different sub-regions of Punjab despite significant differences in their economies and nature of employment opportunities.
For Punjab's unemployed the answer lies in growth
Female labour force participation rate increased from 15.6 percent in 2012-13 to 15.8 percent in 2014-15.
Rapid urbanization: rural areas population decreases to 60.1 %
The work force participation rate refers to the number of persons actually employed as a proportion of the population, whereas the labour force participation rate refers to the ratio of both the employed and the unemployed to the total population.
Declining Trend of Female Labour Force Participation in India
The potential additional labour force also varied significantly between member states, with Italy showing the largest proportion (equivalent to 13.6% of the labour force), ahead of Croatia (9.6%), Bulgaria (7.6%) and Finland (7.4%).
Bulgaria Has Third Largest Potential Additional Labour Force in EU
After having stagnated during 2009-11, the labour force is now experiencing a new burst of growth.
Qatar labour force may reach 1.7mn by year-end: QNB
In such a climate, fewer people tend to enter the labour force, as the prospects of finding work are worse, and labour force participation--the proportion of the population aged 15-74 in the labour force--was indeed low in 2010 (see Diagram 38).
Labour force participation has risen
The unemployment rate according to the quarterly Labour Force Survey climbed to 6.4% of the labour force in the second quarter of 2010.
Cyprus LFS unemployment rate climbs to 6.4%
While the gender equality in the labour market can be considered as legal in Turkey; it has not been reflected to the participation rate of women labour force. So, the disparity in the participation rate to the labor market is based on the socio-economic discriminatory than the legal discriminatory in Turkey.
The housewives biggest groups in inactive labor force: case of Turkey