Competition between two or more companies where all companies produce similar (but not exactly the same) products, but all leave some excess production capacity so that total supply for the market does not meet demand. This results in product prices remaining artificially high and therefore larger profits for the companies involved. Monopolistic competition, when it is the result of collusion between companies, can be illegal under some circumstances. It contrasts with perfect competition.
Farlex Financial Dictionary. © 2012 Farlex, Inc. All Rights Reserved 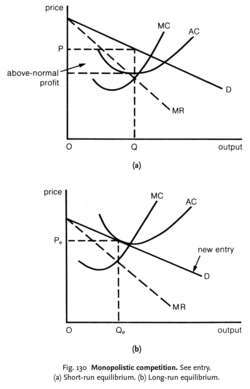 a type of MARKET STRUCTURE. A monopolistically competitive market is one that is characterized by:

The analysis of individual firm equilibrium in monopolistic competition can be presented in terms of a ‘representative’ firm, that is, all firms are assumed to face identical cost and demand conditions and each is a profit maximizer (see PROFIT MAXIMIZATION), from which it is then possible to derive a market-equilibrium position.

The significance of product differentiation is:

The firm, being a profit maximizer, will aim to produce at that price (OPe )-output (OQe) combination, shown in Fig. 130 (a), which equates marginal cost (MC) and MARGINAL REVENUE (MR). In the short run, this may result in firms securing ABOVE-NORMAL PROFITS.

In the long run, above-normal profits will induce new firms to enter the market, and this will have the effect of depressing the demand curve faced by established firms (i.e. push the demand curve leftwards, thereby reducing the volume of sales associated with each price level). The process of new entry will continue until the excess profits have been competed away. Fig. 130 shows the long-run equilibrium position of the ‘representative’ firm. The firm continues to maximize its profits at a price (OPe )-output (OQe) combination where marginal cost equals marginal revenue but now secures only a NORMAL PROFIT return. This normal profit position for the firm in the long run is similar to the long-run equilibrium position for the firm in perfect competition. But monopolistic competition results in a less efficient MARKET PERFORMANCE when compared to perfect competition. Specifically monopolistically competitive firms produce lower rates of output and sell these outputs at higher prices than perfectly competitive firms. Since the demand curve is downwards sloping, it is necessarily tangent to the long-run average cost curve (which is higher than the perfectly competitive firms’ cost curve because of the addition of selling costs) to the left of the latter's minimum point. Firms thus operate a less than optimum scale of plant, and as a result there is EXCESS CAPACITY in the market.

Feedback
Flashcards & Bookmarks ?
Please log in or register to use Flashcards and Bookmarks. You can also log in with
Flashcards ?
My bookmarks ?
+ Add current page to bookmarks
Mentioned in ?
References in periodicals archive ?
Using this intuition the current study will analyze efficiency of exporting and non-exporting under variable returns to scale and constant returns to scale as all firms cannot operate at optimal scale due to financial and imperfect competition related constraints.
Prospects from Efficiency Analysis of Exporting and Non-Exporting Pakistani Firms
P4 and P5 are imperfect competition equilibrium, which are stable points.
Exploring General Equilibrium Points for Cournot Model
Heterodox economics may share certain methodological elements of the mainstream, such as imperfect competition, but they do not necessarily share the same vision.
CLASSICAL POLITICAL ECONOMY RESURGENT
The key to explaining intra-industry trade is imperfect competition. For example, benefits to the consumer (i.e., utility) increase as free trade increases the variety of goods available according to a model that takes product differentiation based on imperfect competition into consideration.
Theory and Practice in Free Trade
In many respects his treatment of margin monopoly replicates Joan Robinson's treatment of dumping in The Economics of Imperfect Competition (Robinson 1933), although Mises does not cite Robinson.
Ludwig Von Mises' neoclassical analysis of dumping
Thus, technology shocks can be better estimated by eliminating the effects of markup and IRS from TFP growth, and allowing for capacity utilization if there exist IRS, imperfect competition, and variable capacity utilization.
Factor determinants of total factor productivity growth for the Japanese manufacturing industry
A fourth hypothesis for the differences in price is that there is imperfect competition in the solar PV market and consumers face search and information costs.
Deconstructing Solar Photovoltaic Pricing: The Role of Market Structure, Technology, and Policy
In this paper, the authors incorporate a search-theoretic model of imperfect competition into an otherwise standard model of asymmetric information with unrestricted contracts.
Screening and adverse selection in frictional markets
Modern economics now analyzes markets as situations where firms engage in either perfect or imperfect competition. Under perfect competition, the individual firm is so small relative to the total market that it has no influence on the price of its product and takes the market price as "given," i.e., it can increase or decrease its output without changing the price.
From Marshallian partial equilibrium to Austrian general equilibrium: the evolution of Rothbard's production theory
All of those exclusive rights tend to drive self-catalyzing processes of productive, entrepreneurial innovation that result in imperfect competition among producers of differentiated goods, services, or works.
Can economic and historical analyses end copyright law's property/monopoly disputes?
Gali then discusses the relevance of zero lower bound on the interest rate, and extends the framework by introducing imperfect competition and staggered wage and price setting.
Monetary Policy, Inflation, and the Business Cycle: An Introduction to the New Keynesian Framework and Its Applications, 2nd Edition