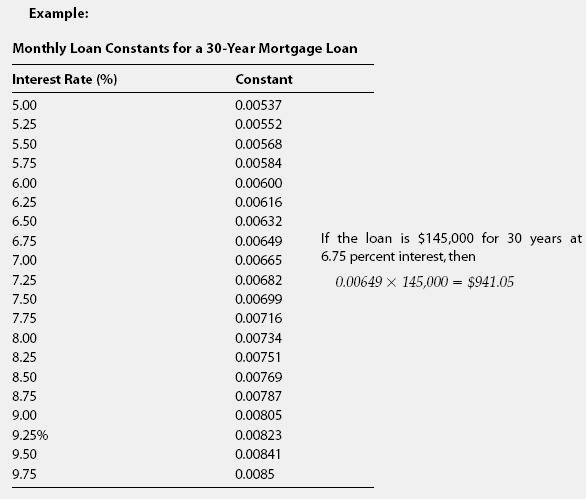 The annual payment required to pay the principal and interest due on a $1 loan for a specified repayment term at a specified interest rate.Before the widespread availability of computers and extremely affordable financial calculators,it was common to use mortgage constant tables to calculate monthly payments. One would refer to the table for the proper loan term, such as 30 years, and then within that table find the loan constant for the anticipated interest rate. See the following example. The constant is the monthly payment on $1. To find out your own monthly payment, you multiply the constant by the number of dollars in your loan, and the answer is what your monthly payments would be.

Feedback
Flashcards & Bookmarks ?
Please log in or register to use Flashcards and Bookmarks. You can also log in with
Flashcards ?
My bookmarks ?
+ Add current page to bookmarks
Mentioned in ?
References in classic literature ?
To me the idea of an immediate union with my Elizabeth was one of horror and dismay.
View in context
It is true, that the Confederacy is to possess, and may exercise, the power of collecting internal as well as external taxes throughout the States; but it is probable that this power will not be resorted to, except for supplemental purposes of revenue; that an option will then be given to the States to supply their quotas by previous collections of their own; and that the eventual collection, under the immediate authority of the Union, will generally be made by the officers, and according to the rules, appointed by the several States.
View in context
The crisp, fresh mountain air outside the cave acted as an immediate tonic and I felt new life and new courage coursing through me.
View in context
SALES OF FIXED IMMEDIATE annuities have not increased significantly from 2003 through the first half of 2005, despite the approaching retirement of the oldest baby boomers and the rapid disappearance of defined benefit pensions.
In particular, some markets actually are seeing increased immediate annuity sales.
From a consumer standpoint, immediate annuities are clearly a postponable purchase.
Also, immediate annuities generally represent an irrevocable commitment, which tends to be somewhat intimidating to many buyers.
Given all that, predictions have surfaced that the long-awaited boom in fixed immediate annuity Sales never will materialize.
Fixed immediate annuities selling well in some channels: overall sales seem slow, but there are pockets of high activity