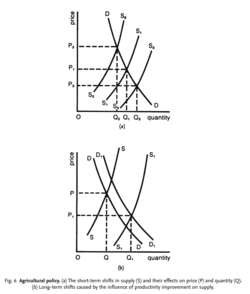 Feedback
Flashcards & Bookmarks ?
Please log in or register to use Flashcards and Bookmarks. You can also log in with
Flashcards ?
My bookmarks ?
+ Add current page to bookmarks
Mentioned in ?
References in periodicals archive ?
Clwyd County Chair Paul Williams, NFU Cymru President John Davies and NFU Cymru Director John Mercer, will explain the proposals put forward by Welsh Government in this consultation, focusing on future food and farming policy and support measures in Wales post-Brexit.
Future of agriculture on agenda
As we prepare to leave the EU, it gives us a chance to create a new farming policy that works for farmers and nature.
New farming system can help secure future of farmland birds; RSPB Cymru
A group of farmers and crofters descended on Holyrood earlier this week to demand significant changes to farming policy to address climate change and biodiversity loss.
Group wants greener policies
Will it be possible under future farming policy to extend bridle-paths?"
87 HORSES KILLED
The National Farmers' Union wants to see the planned new farming policy after the UK leaves the European Union allow consumers to enjoy more sustainable, quality and affordable British food, whatever their income.
Post-Brexit farming policy must put British suppliers first
The ambition of the European Union to accord farming policy with 2020 Green proposals means farmers would be forced to set aside 7% of land on top of any fallow pasture that already exists.
Brussels plan is a huge gamble; Yousay
In a letter to Mrs Spelman, the FUW outlined nine points which should underpin future farming policy.
Farmers will be 'wage slaves'
Sir Donald Curry, government adviser for food and farming policy, spoke about the growth of the global population and the increase in the demand for food.
Future of farming
Terry Court and Richard Grainger, joint managing directors of auctioneers Brightwells Ltd, said the market's decline was due to a number of events which had shaken the farming industry in recent years, plus changes in EU farming policy and supermarket domination of the wholesale meat trade.
Rural Matters: Livestock market to close
Ville Itala, the Finnish coalition party chairman, has criticised the government's farming policy.
Finnish coalition party chairman criticises farming policy
Chirac launched a tirade against Blair at the end of a tense EU summit where Britain frustrated a French bid to block reform of European farming policy.
Chirac `loses plot' in Blair clash