(redirected from Excess burden of taxation)
Also found in: Wikipedia.

The loss of economic activity due to excessive taxation. For example, suppose a person on welfare is offered a job that pays more than he/she receives in welfare benefits. If taxes are too high, however, the person may find that his/her aftertax income is in fact lower than what he/she was receiving on welfare. The person might then rationally decide to stay on welfare. The deadweight loss is both the cost of keeping that person on welfare and the loss incurred from the economy at large from losing that person's production. It is also called the excess burden of taxation.
Farlex Financial Dictionary. © 2012 Farlex, Inc. All Rights Reserved 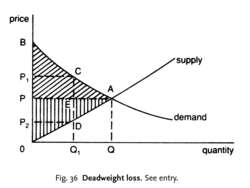 the reduction in CONSUMERS’ SURPLUS and PRODUCERS’ SURPLUS that results when the output of a product is restricted to less than the optimum efficient level that would prevail under PERFECT COMPETITION. Fig. 36 shows the demand and supply curves for a product, and their interaction establishes the equilibrium market price OP. At this price, consumers’ surplus is shown as the diagonally shaded area ABP and producers’ surplus as the vertically shaded area APO. If output is restricted from OQ to OQ1, then the price paid by consumers would rise to OP1 and consumers’ surplus would be reduced by the amount ACE, while the price received by producers would fall to OP2 and producers’ surplus would be reduced by the amount ADE.

Deadweight loss is particularly likely to occur in markets dominated by MONOPOLY suppliers who restrict output in order to keep prices high.