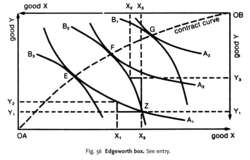 Only where individual A's indifference curves are tangential to individual B's indifference curves (points E, F and G in Fig. 56) will A's marginal rate of substitution of product X for product Y be the same as B's marginal rate of substitution of X for Y, so that their relative valuations of the two products are the same. Starting from any other point, say Z, the two can gain by trading with one another.

Feedback
Flashcards & Bookmarks ?
Please log in or register to use Flashcards and Bookmarks. You can also log in with
Flashcards ?
My bookmarks ?
+ Add current page to bookmarks
Mentioned in ?
References in periodicals archive ?
Stephen represented the laws of demand and supply diagrammatically in the early 1860s, Venn reconstructed Boole's logical processes diagrammatically, Marshall found it entirely normal to translate passages from Mill's Political Economy into relationships in two-dimensional space, and Bowley constructed extremely messy contract curves in the Edgeworth-Bowley box.
Masters of Theory and its Relevance to the History of Economic Thought (1)
In those days classrooms were not equipped with projectors, so Paul had to carefully draw the edges of the Edgeworth-Bowley Box and the two parties' indifference curves in differently colored chalk.
Introduction of Nobel Laureates