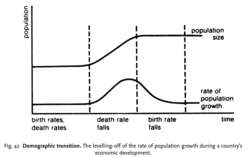 Fig. 42 Demographic transition. The levelling-off of the rate of population growth during a country's economic development.

a POPULATION cycle that is associated with the ECONOMIC DEVELOPMENT of a country. In underdeveloped countries (i.e. subsistence agrarian economies), BIRTH RATES and DEATH RATES are both high, so there is very little change in the overall size of the population. With economic development (i.e. INDUSTRIALIZATION), INCOME PER HEAD begins to rise and there is a fall in the DEATH RATE (through better nutrition, sanitation, medical care, etc.), which brings about a period of rapid population growth. Provided ECONOMIC GROWTH is consistently greater than the increase in population, income per head continues to expand and eventually serves to reduce the BIRTH RATE (small families become the ‘norm’ in society as people seek to preserve their growing affluence). At this point, population growth slows down and may eventually level off.

Most advanced industrial countries have gone through a demographic transition of the kind described above and are today characterized by both low birth and death rates and slow-growing populations. See POPULATION TRAP, DEVELOPING COUNTRY.

Feedback
Flashcards & Bookmarks ?
Please log in or register to use Flashcards and Bookmarks. You can also log in with
Flashcards ?
My bookmarks ?
+ Add current page to bookmarks
Mentioned in ?
References in periodicals archive ?
Thus, comparisons among these countries provide strong tests of the demographic transition model and, alternately, the economic opportunity model.
Allowing fertility decline: 200 years after Malthus's essay on population
The demographic transition model is used to provide the framework for "understanding the history of Canadian population growth, as well as demographic processes and characteristics of post-industrial Canada." Chapter 3 focuses on how the age-sex structure of a population is influenced by and/or influenced the dynamic population growth components of migration, mortality and fertility.
Canadian population
The conventional analysis of population dynamics includes a simple demographic transition model (DTM), which correlates birth and death rates with different phases of societal development.
Population Politics: The Choices that Shape Our Future