The right to build on, occupy, and/or profit from the air above a piece of real estate. Supposedly, air rights have existed as long as the concept of private property, but it became important in the 20th century as air travel became more common. In the United States, air rights only extend to the amount of air that one may reasonably occupy. As with other aspects of real estate, air rights may be sold, leased, or otherwise acted upon either in conjunction with or separate from the property to which they are attached. See also: Mineral Rights.
Farlex Financial Dictionary. © 2012 Farlex, Inc. All Rights Reserved 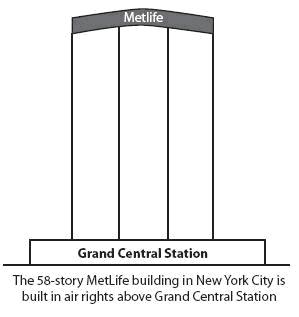 Historically,property owners owned to the center of the earth and to the top of the heavens, which included the right to all the air above the property and the right to exclude trespassers from that air. Until the invention of aircraft, the matter typically arose only in disputes over the right to remove tree limbs extending over one's property. Today, aircraft constantly trespass into property owner's air space and violate their air rights.As an accommodation to modern technology, courts allow reasonable trespasses to air rights. Airports and governments frequently purchase air rights adjacent to an airport,called avigation easements,to provide glide paths for aircraft.(Because of the scarcity of prime real estate near city centers, many local governments are investigating and implementing plans to lease air rights above transit hubs to developers,for building hotels and other such projects.)